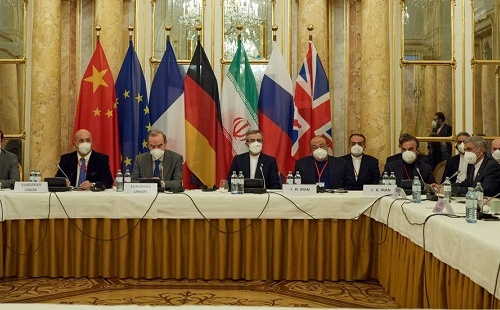 After a period of consultations in capitals, negotiators from Iran and the remaining parties to the 2015 nuclear deal are expected to gather in Vienna on Monday to resume talks on how to remove U.S. sanctions against Iran.

The latest round of talks was concluded more than a week ago with an agreement on some broad principles based on which the next round of the talks would proceed. The last round of talks faced many ups and downs due to Western refusal to take into consideration the change Iran had undergone in the past months in terms of the election of a new president.

The new negotiating team of Iran led by Deputy Foreign Minister Ali Bagheri Kani went to Vienna with a set of new proposals on the nuclear and sanctions spheres. The team brought to Vienna many proposals and it managed to present the proposals in stages. Two of the proposals, one related to nuclear measures and the other on sanctions removal steps, were given to the other side.

While Iran underlined that its draft proposals are subject to negotiations, the U.S. and the E3 -France, Britain, and Germany – chose to portray Iran as an uncooperative and unserious negotiating partner. They even hinted at the failure of the talks based on a figment of their imagination.

On the other side, Iran underlined its seriousness to reach a good and swift deal. In a recent phone conversation with EU foreign policy chief Josep Borrell, Iranian Foreign Minister Hossein Amir Abdollahian stressed that a good deal is within reach. He said, “We believe that a good deal is at hand but it requires a shift by some parties away from the language of threat to the language of cooperation and mutual respect that would be also result-based.”

Amir Abdollahian further noted on Twitter that such a deal is at hand if the West shows goodwill.

While Iran has conditioned making a good deal on Western goodwill, the Europeans and their American colleagues showed no interest in pursuing negotiations in good faith. Drawing on the Trump administration’s playbook, they used everything in their power to use the Vienna talks as a “starting point” for further negotiations with Iran. In other words, the Western negotiators are not in Vienna to simply return to the 2015 nuclear deal, officially known as the Joint Comprehensive Plan of Action (JCPOA). Instead, they want to impose a really flawed version of the JCPOA on Iran while retaining large swaths of U.S. sanctions for follow-on negotiations. This aim runs counter to the terms of the JCPOA.

In addition, the U.S. seeks to use the yellow sanctions to “strengthen and lengthen” the JCPOA.

Iran, however, has rejected this categorization, arguing that all the sanctions imposed on Iran since 2015 are primarily meant to scupper the JCPOA and thus inconsistent with the JCPOA. This is while the U.S. has sought to perpetuate some of its sanctions under the pretext that they are consistent with the deal.

In short, Iran seeks to revive the JCPOA and the U.S., together with the E3, wants to revisit the 2015 deal.

With the Vienna talks kicking in again, the U.S. and Europe sought to create a sense of urgency on the talks and set artificial deadlines in a bit to pressure Iran. Western diplomatic circles are now talking of an early-February deadline to conclude the talks.

U.S. Secretary of State Antony Blinken has recently claimed that the window is closing to resuscitate the 2015 deal. “I’m not going to put a time limit on it or give you the number of meters remaining on the runway, except to say, yes, it is getting very, very, very short,” Blinken said.

U.S. special envoy for Iran Robert Malley set the time frame to save the JCPOA at “weeks.” Malley pointed that if the Iranians “continue at their current pace, we have some weeks left but not much more than that, at which point, I think, the conclusion will be that there’s no deal to be revived.”

Iran has said it wants a swift deal but won’t sacrifice its interests on the altar of self-imposed deadlines.