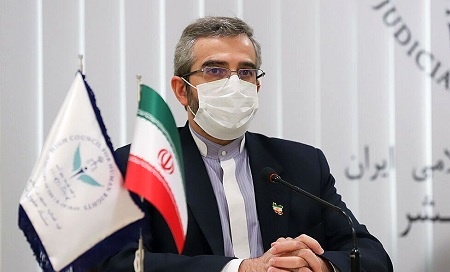 The Iranian deputy foreign minister made the remarks at the end of his visit to the capitals of several European countries.

Ali Bagheri Kani tweeted on Friday night: During my trip to France, Germany, Britain and Spain, I had serious and constructive talks on bilateral, regional and international issues, including the forthcoming talks.

Bagheri traveled to Europe for four days for diplomatic consultations and met with officials from the foreign ministries of France, Germany, Britain and Spain.

He also met with Enrique Mora, the deputy secretary general of the foreign action service, who is chairing the meeting of the joint commission of the Joint Comprehensive Plan of Action (JCPOA).

Bagheri and Mora also met in Brussels on October 27 and in Tehran on October 14. The two sides agreed in a telephone conversation two weeks ago on the resumption of talks about the implementation of JCPOA in Vienna for November 26.

The deputy foreign minister described the purpose of the talks as the lifting of illegal sanctions.