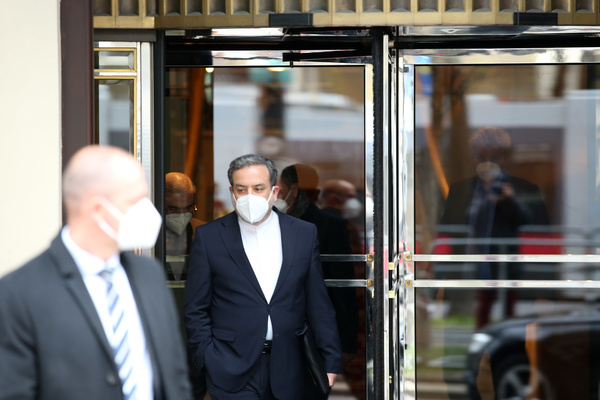 Deputy Foreign Minister for Political Affairs Abbas Araghchi said on Monday that delegations may need to return their states once again for further consultations.

Referring to the complexities of the Vienna negotiations, he noted that they have reached the main issues of disagreement, adding that they have made good progress so far.

Pointing to the significant differences, he stated that texts have been prepared, but disputed issues are under investigation.

Touching on the trilateral meeting with representatives of Russia and China, he highlighted that there is good coordination among Iran, Russia, and China.

He added that they had another quadrilateral meeting with three European countries, and expert meetings continue.

Stressing that so far a good path has been taken, he underscored that he is not personally sure that they will reach a conclusion during this period. However, they continue their efforts.

He said that delegations may need to visit their countries once again for further consultations, adding that no definitive decision has yet been made on the matter.

In reaction to the question about the joint JCPOA meeting, Araghchi said that it is common that always negotiations start with a round of joint commissions and wrap up with a joint commission meeting.

Stating that the main issues are discussing in the two, three, and multilateral meetings, he went on to say that efforts are continuing to get to the final conclusion as quickly as possible.

The fifth round of talks between the remaining participants to JCPOA began in the Austrian capital last Tuesday. The participating parties say that the talks have made good progress and a final agreement is within reach.

The Iranian delegation to Vienna headed by Araghchi is moving forward with talks with participants to the nuclear deal, ahead of another Joint Commission meeting.

The latest round of JCPOA joint commission meetings started on April 2 with a virtual conference and is pursued by other meetings in person in Vienna.

Britain, China, France, Germany, Iran, and Russia have been attending the meetings as the JCPOA participants and a delegation from the United States in Vienna holding talks with the Europeans.

Iran has stated that it wasn’t going to have any direct or indirect talks with the US representatives as it deems such talks unnecessary.

The US has indicated that it’s willing to rejoin the JCPOA, after the 2018 withdrawal by the Trump administration, but has yet to take the first step which Iran insists must be from the American side.