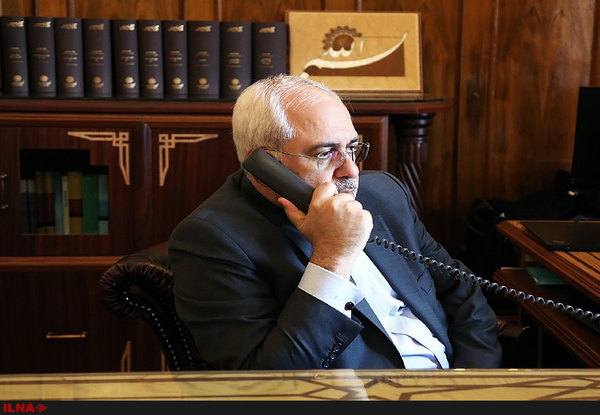 British Foreign Secretary Jeremy Hunt stressed in a phone conversation on Saturday with Zarif that Tehran has the right to sell its oil.

Zarif in response reiterated that his country will keep selling its crude under any circumstances.

Hunt expressed hope that legal and judicial studies carried out by Gibraltar officials would lead to the immediate liberation of the crude carrier Grace 1 that has been seized by the British colony two weeks ago.

The supertanker Grace 1 was arrested by the British Marina in the international waters two weeks ago, claiming the vessel was heading for Syria, sanctioned by the European Union (EU).

Iran rejects the British claim, saying it was carrying its oil and that it was not headed for the Syrian port of Banyas.

“The EU has always been against the US extraterritorial sanctions so it can’t do the same with Iran,” said the Iranian foreign minister, urging London to take the necessary measures to end the illegal seizure of the Panama-flagged tanker.

The British foreign secretary called his Saturday phone call with Zarif as “constructive”, saying that he “reassured him [Zarif] our concern was destination not origin of the oil on Grace One.

Hunt added in a Twitter thread that “UK would facilitate release if we received guarantees that it would not be going to Syria, following due process in Gib courts”.

Gibraltar police said on Saturday they released all the crew members on bail but the ship itself will be seized until July 19.

“Was told by FM Zarif that Iran wants to resolve issue and is not seeking to escalate,” wrote the British official, adding that he also talked with Gibraltar Chief Minister Fabian Picardo who “shares UK perspective on the way forward”.

Zarif told Hunt that he “would continue to seek to find a solution”, according to the British minister’s tweet.

The Iranian foreign minister urged Hunt to “respect the implementation of law and the Judiciary’s independence” in Zaghari’s case, stressing that “her arrest and trial were all rightful and legal”.