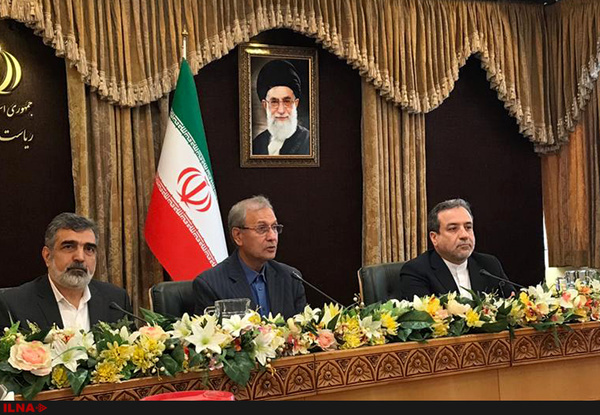 Iran says it is starting to enrich uranium to a higher purity than 3.67%, as the European signatories to a 2015 agreement with Tehran miss a 60-day deadline to offset the adverse impacts of a unilateral pullout by the United States.

Iran’s latest cut in its obligations under the Joint Comprehensive Plan of Action (JCPOA) was announced during a joint news conference by Deputy Foreign Minister for Political Affairs Abbas Araqchi, Administration spokesman Ali Rabiei, and Behrouz Kamalvandi, the spokesman for the Atomic Energy Organization of Iran (AEOI), in Tehran on Sunday.

Kamalvandi and Araqchi then took topic-based questions, and Rabiei moderated the briefing.

Kamalvandi said that Iran would increase uranium enrichment from the current 3.67% to the level that fulfills the needs of its power plants.

He also noted that the country had not yet decided on the level of enrichment for the Tehran research reactor.

Behrouz Kamalvandi, the spokesman for the Atomic Energy Organization of Iran (AEOI), speaks to Iran’s Press TV following a press briefing, in Tehran, on July 7, 2019.

Araqchi said that the Europeans were yet to meet Iran’s demands, including regarding a non-dollar direct payment channel with Iran known as INSTEX but were also making certain efforts, indicating that those efforts could still bear fruit.

The deputy Iranian foreign minister also noted that Iran was holding talks with Chinese and English officials regarding the redesign of Arak reactor, which the US had originally undertaken to carry out under the JCPOA. He said those talks were proceeding for now but added that Iran had the will and technology to redesign the reactor on its own if the talks failed to produce favorable results.

He also said Iran had planned out 60-day contingencies for every European failure to meet Iranian demands and could potentially ultimately scrap the deal altogether.

Trump unilaterally withdrew from the JCPOA in May 2018, introducing old and new sanctions on Iran and seeking to scupper its implementation by the remaining signatories, including mainly Europe.

While being opposed to the US withdrawal and its attempts to hinder the agreement, the European signatories have been unable so far to ensure that Iran receives the economic benefits that it has been promised under the deal but which have been hampered by the US sanctions.

Iran, which had been fully complying with all of its commitments despite the US pullout and the European shortfalls, then issued a deadline for its partners to step up their efforts or see Tehran gradually scale back its implementation of the deal under the agreement’s own provisions.

In a fact sheet, the Iranian Foreign Ministry listed both the measures that the Europeans had undertaken to implement in the course of meetings since the US pullout and the measures Iran would be taking to scale back its performance of the deal.

The Islamic Republic says the suspension of its commitments is not a violation of the JCPOA but is based on Articles 26 and 36 of the agreement itself.