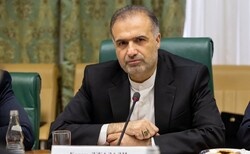 The exchange of currencies happened through Russia’s Mir business bank, Kazem Jalali said in a meeting held in Moscow on Tuesday evening with industrial practitioners who are present in MIMS Automechanika Moscow (Int'l Exhibition of Automotive Parts, Components, Car Maintenance Equipment, and Products) underway in the Russian capital.

As the current Iranian government, which took office a year ago, is after developing cooperation with neighbors, the Islamic Republic pays special attention to Russia, Jalali underlined.

Russians and foreign participants in the MIMS Automechanika have wondered when they saw Iran’s industrial capabilities introduced to the exhibition, he added.

The MIMS Automechanika Moscow (Int'l Exhibition of Automotive Parts, Components, Car Maintenance Equipment, and Products) kicked off in the Russian capital on August 22 and is to go on for four days. About 600 companies from 18 countries have participated in the event.

He went on to say that agricultural products are the main parts of Iran’s exports to Russia; meanwhile, Tehran can today export technology to this country.

Touching upon the issue of the North-South Transport Corridor whose deal started in 2000, the ambassador said the Russian side has stressed the importance of completing the corridor.

North–South Transport Corridor is a sea, rail, and road route expected to facilitate and boost the exchange of goods between Iran, India, Russia, Europe, and the Central Asian states.

In his remarks, the ambassador also referred to good agreements between Iranian and Russian customs administrations and described it as a big step.

Also about the 25-year document on the agreement on cooperation between Tehran and Moscow, Jalali said it is not a secret issue but a strategic agreement whose draft has already been prepared and the two governments will sign it after review; then it will be sent to the Majlis (Parliament) for approval.