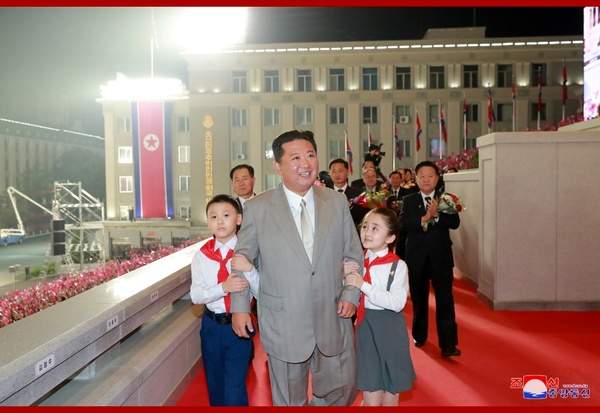 Kim Jong Un, president of the State Affairs of the DPR. Korea, is seen coming to the platform of Kim Il Sung Square, venue of the parade of paramilitary and public security forces for celebrating the 73rd founding anniversary of the DPR. Korea on September 9, 2021.

Ten years have elapsed since President Kim Jong Un of the State Affairs of the Democratic People’s Republic of Korea began to lead his country by inheriting the cause of Chairman Kim Jong Il of the National Defence Commission. One saying has it that ten years change the looks of mountains and rivers. During the last decade the DPRK has achieved world-startling changes one after another.

It can be said that these achievements are the fruition of Kim Jong Un’s politics.

Kim Jong Un has reflected the people-friendly and people-loving character in the politics of the ruling Workers’ Party of Korea. “Everything for the people and everything by relying on them!”—this is a slogan he put forward, and the political philosophy of the ruling party and the state is the people-first principle.

His people-loving politics is not something like seeking fame or achieving successes habitually pursued by the Western politicians in general.

Last year when typhoons and flooding hit different areas of the country, Kim Jong Un personally drove his car to the spots. In this country, where a well-regulated working system has been established, the leader could learn the actual situations and take appropriate measures without giving personal field guidance. But he refused to do so.

He did not hesitate to drive his car on the roads that became slippery and muddy by heavy rainfalls or to dangerous areas where the swell of typhoons was yet to be removed.

He met and consoled the victims and raised fallen rice plants with his hands. The appearance of the leader, who goes closer to the people suffering from trials, moved the world.

This is how the country, though it was in a difficult situation owing to the persistent harsh sanctions imposed by the hostile forces and to the world health crisis, could build tens of thousands of new houses more splendid than their original ones in a matter of a few months, thus stabilizing the victims’ living as soon as possible.

Over the last decade streets and bases for cultural and leisure activities have been built in various parts of the country, dramatically changing its appearance. All these are born by his politics of loving the people.

This year, too, the situation surrounding the country is still arduous, but an unprecedented, grand construction projects are underway. Kim Jong Un is determined to have many houses built in different parts of the country in the period of new five-year plan for national economic development, particularly 10 000 flats in the capital city every year in this period, so as to improve the people’s living standards more satisfactorily.

It is quite natural that the single-hearted unity, in which the leader and the people share the same ideology and destiny, is being cemented rock-solid across the country, and so is the fact that the country is recognized as a political power unperturbed by any storms.

The recent political diplomacy of the DPRK mirrors the charisma of Kim Jong Un who is strong and yet flexible in diplomacy.

When it is regarded as the superior tactics in politics and diplomacy to attain a desired goal by properly combining strong and flexible and leading the counterpart to make compromise, it can be said that Kim Jong Un is a statesman who raises his country’s international prestige to the highest stage through unpredictable, free and brisk political diplomacy.

The DPRK government’s hard-line approaches and measures for defending the country’s dignity and interests are all indicative of his strong temperament.

Kim Jong Un, who is known to the world as a leader unyielding and strong in principle, is not a politician who only follows a one-sided, hard-line policy. He is an adroit and seasoned politician who makes the most of the rhythm of the strong and the weak in politics.

By pursuing such outstanding political diplomacy, Kim Jong Un made sure that summits were held with the US, which had long been in an acute confrontation with his country, thus unfolding epochal scenes of political diplomacy. He also developed his country’s friendly relations with China, Cuba, Russia and Viet Nam to higher plane through energetic and strategic diplomacy, thus making a breakthrough in the ring of encirclement formed by the hostile forces to isolate it in the international arena.

In this way, his political diplomacy can be characterized by such important features that are strong and yet flexible, fair and square and yet courteous, and justifiable and yet profit-gaining.

What is noteworthy in the remarkable successes the DPRK achieved in the last decade is that it definitely secured the position of a strategic state which can defend peace in northeast Asia and the rest of the world.

To remove the potential crisis lingering on the Korean peninsula, in which an accidental spark may escalate into a world nuclear war, the DPRK demanded several times that the US and the country should replace the Korean Armistice Agreement with a peace pact and that the US should withdraw its hostile policy toward it. However, it all fell on deaf ears. The US rather raised the intensity of the economic sanctions and military pressure upon it on the strength of its own enormous economic and military capabilities.

There is a saying, “An eye for an eye and a tooth for a tooth.”

He made a resolute determination to remove the source of the danger of war on the Korean peninsula and guarantee the safety of the state and the people in the most convincing way. Thanks to his persevering and strenuous efforts, the country possessed nuclear weapons with which to counter the nuclear weapons of the US.

The country has become a strategic state, both in name and reality, which can not only control the situation around it but also take the lead in defending regional and global peace with its perfect and powerful war deterrent.

As he placed the status of his country definitely on that of a military power that no one can belittle, he is now devoting his all to provide his people with a more cultured and happier life by making his country a powerful socialist one at the earliest possible date.

From olden times it has been said that a man who loves children is honest-minded and righteous, and the country that enforces the policy of loving children is the most beautiful one.

The realities in the Democratic People’s Republic of Korea give a clear understanding of the true meaning of this saying.

Kim Jong Un, President of the State Affairs of the Democratic People’s Republic of Korea, loves children very much.

When the new Pyongyang Orphanage and Baby Home were under construction, people except relevant officials and residents living nearby did not know where their previous buildings were.

One February day in 2014 he visited the old Pyongyang Orphanage and Baby Home without a prior notice. Embracing the children who were approaching, saying “Father!” he asked “How old are you?” “Are you fine?” He stressed that the children with no parents were also the successors to our revolution and pillars of our future. That year, greeting the International Children’s Day, he visited the Pyongyang Orphanage again, and said: When the laughter of children rings aloud, the whole country becomes bright; now the Workers’ Party of Korea is having a modern orphanage and baby home built on the Taedong riverside; these children will celebrate the following June 1, the International Children’s Day, at the newly-built orphanage.

On the morning of New Year’s Day in 2015, he visited the orphanage again to wish the children a happy new year. That day he said that while looking round the newly-built orphanage and baby home in October the previous year he had made a promise to come there on the coming New Year’s Day, and that to keep his promise, he came there soon after he delivered the new year address.

One year, while visiting the Wonsan Orphanage and Baby Home that were to be inaugurated, he said with great satisfaction: Such marvellous and handsome structures would be difficult to be found elsewhere in the world; the parentless children will grow up brightly and cheerfully, calling the Party and motherland their father and mother, to become trustworthy pillars of the country; a mere thought of it makes me to harden the determination to sweat more and spare nothing for the sake of the coming generations.

Kim Jong Un is working with devotion to build a beautiful country where all the children will grow stoutly and beautifully without any worry.

DRPK’s Dream: Within 15 Years or So

A declaration rang out in the Democratic People’s Republic of Korea that it will build itself into a powerful and prosperous socialist country in which all the people are living happily, drawing the attention of the international community.

Many people of the world doubt if the country’s dream can come true when it is experiencing unprecedented trials and hardships amid the harsh sanctions by the hostile forces and world health crisis.

The construction of such a country must be supported first by funds.

This shows that the DPRK has a strong financial capacity. In other words, it can make investments in the economy while building such a large number of houses and giving them to the people free of charge.

Building a powerful country is inconceivable separated from a high level of science and technology and rich resources.

The DPRK is on a high level in basic sciences like mathematics and physics, and laser, space, CNC machine tool and software technologies are recognized by the world. A few years ago VOA commented that in view of the performance tables and operation of the CNC machine tools made public, it can be said that the country possesses the technology that can be ranked in the top ten in the world.

In the aspect of resources, the country has large deposits of magnesite, zinc, lead, graphite, tungsten, anthracite coal and iron. According to a report, the major underground resources, excluding the rich deposits of brown coal and limestone, when calculated in the international market price, amount to USD 3-4 trillion.

At its Eighth Congress held early this year, the ruling Workers’ Party of Korea indicated a clear-cut orientation of the country’s development, and all the people have turned out with confidence for the building of a powerful socialist country.

What the world must not neglect is the fact that the DPRK carried out the historic task of socialist industrialization within 14 years in the middle of the last century. As it did at that time, the world will see the country turning its dream into reality for a powerful socialist country within 15 years or so.