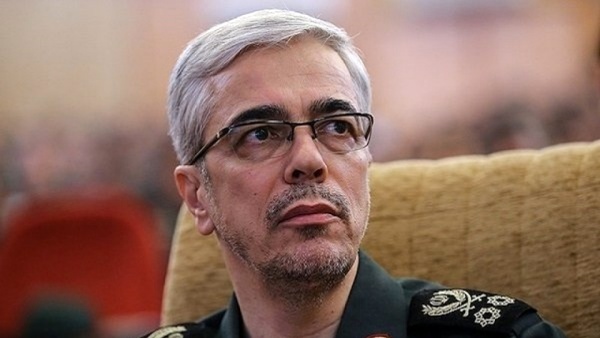 General Baqeri made the remarks in a meeting held Tuesday in Tehran to introduce its newly-appointed deputy Brigadier General Mohammad Reza Ashtiani.

Commenting on the US and the Europeans' renegade on the Joint Comprehensive Plan of Action signed in July 2015 nuclear deal with Iran, the top military official said that Iran waited for a year to assure all people and all world governments that it abides by its commitments to JCPOA.

At the first anniversary of the US unilateral withdrawal from the JCPOA on May 8, 2018, Iran reduced commitments to the international deal based on Articles 26 and 36 of the JCPOA.

"Iran did prove that it does not want conflict, Iran stands up to aggression or renegade on the JCPOA commitments."

It is the enemy who is not loyal to its commitments, Baqeri said adding that Iran, reacting to such disloyalty, entered a new phase and is now determined to follow a new strategy called "Active resistance".

Major General Baqeri, in the Tuesday ceremony, also commented on the economic sanctions and pressures on Iran, saying they are incentive for the country to become self-sufficient.

"Today is time for hitting the peak of power and deterrence."

The high level of Iran's deterrent power was proved when the Iranian forces shot down the US drone which had violated the Iranian airspace, Major General Baqeri said.

The issue that the US drone was downed by a weapon built by young Iranian experts is very important because it could change the enemies' equations, Baqeri said.

Asked about capture of the supertanker carrying Iranian oil by the UK off the coast of Spain on July 6, Baqeri said the seizure based on the baseless accusations was a retaliatory action against Iran's "brave, transparent and direct move against the enemy's drone."

According to Spanish officials, the Grace 1, Panamanian-flagged tanker carrying Iranian oil, was seized by British patrol ships off Gibralter and was detained on the US orders.