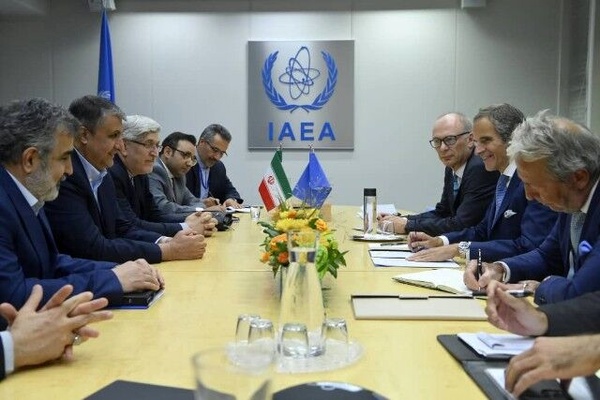 Grossi published a picture of his meeting with the chairman of the Atomic Energy Organization of Iran (AEOI) Mohammad Eslami on Monday night, saying that he hosted Eslami on the sidelines of the IAEA conference in Vienna, Austria.

Grossi had earlier claimed that there was a gap between IAEA-Iran interaction, alleging that the organization’s verification and supervision of Iranian nuclear commitments have been affected seriously by Tehran’s decision to halt implementation of its obligations, including the Safeguards Agreement.

In case the commitments of the Islamic Republic have been resumed within the framework of the 2015 nuclear deal also known as the Joint Comprehensive Plan of Action (JCPOA), the IAEA should fill in the gap in its know-how regarding the time when the organization’s monitoring equipment was not active in Iran, he added.

As to the implementation of the Safeguards Agreement by the Islamic Republic, he claimed that the IAEA has interacted with Iran to resolve the outstanding issues concerning uranium particles in three sites, but Tehran has not had any interaction with the organization since last June; as a result, the issues have not been resolved and the nuclear watchdog is not in a position to guarantee that Iran’s nuclear activities are sole of peaceful nature.

He further put forward the allegation that the UN nuclear watchdog is still ready to resolve the remaining issues via resumption of interaction without any delay, and that we should find common resolutions because if we do not resolve the issues on the basis of cooperation, they would not be put them aside.

The IAEA director general has been leveling claims against Iran’s nuclear activities for three years now. It is interesting that from the onset, the allegation on three unannounced sites was claimed by the former Zionist prime minister; then, Western media outlets and negotiators fomented the accusation.

The Islamic Republic has time and again rejected the claims, noting that the commitments of countries in terms of the Safeguards Agreement are not unlimited.

Iran’s AEOI chief underlined that the allegations are fabricated and unfounded, because the mentioned sites are not related to the Iranian government and they are not nuclear facilities, but they are private properties.