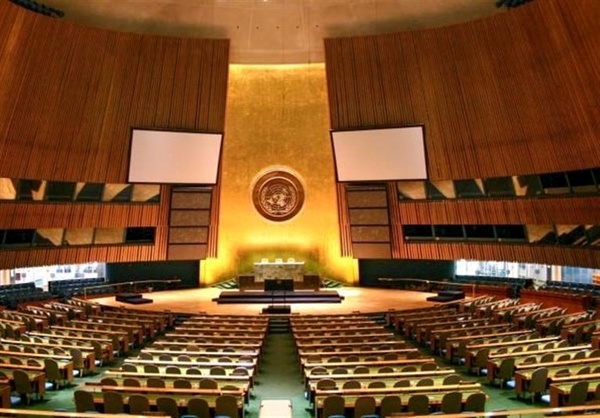 An Iranian diplomat called upon the nuclear weapon states to implement their long overdue obligations on nuclear disarmament and stop the vertical, horizontal, quantitative and qualitative proliferation of nuclear weapons.

The envoy delivered a speech to the Main Committee I of the Tenth NPT Review Conference, held in New York on Tuesday, to expound on the Islamic Republic’s views and proposals on nuclear disarmament.

What follows is the full text of the remarks by the Iranian representative:

In the Name of God, the Compassionate, the Merciful.

The decisions and the resolution adopted by the 1995 NPT Review and Extension Conference, the Final Document of the 2000 Review Conference, and the conclusions and recommendations for follow-on actions of the 2010 Review Conference have stipulated the required actions to reach the goal of total elimination of nuclear weapons.

The immediate commencement and early conclusion of negotiations on a non-discriminatory and universally applicable convention banning the production of fissile material for nuclear weapons or other nuclear explosive devices; The determined pursuit by the nuclear-weapon States of systematic and progressive efforts to reduce nuclear weapons globally; the development of nuclear-weapon-free zones, especially in regions of tension, such as in the Middle East, as a matter of priority; further steps to assure non-nuclear-weapon States party to the Treaty against the use or threat of use of nuclear weapons; and last not least to sign and bring into force comprehensive safeguards agreements with the IAEA by all member states and also the follow on steps have been enshrined consensually in those outcome documents.

I must emphasize that these measures have not had a limited duration and until and unless realized, they do and must remain valid. In the same vein, the nuclear weapon states must stop vertical and horizontal as well as quantitative and qualitative proliferation of nuclear weapons. They should also end the role of nuclear weapons in their doctrines.

Now, the international community requires these measures more than ever; and to meet these requirements, not only does the Conference need to reaffirm previously adopted obligations and commitments but also, it should make tangible progress in this regard.

The Islamic Republic of Iran has implemented its obligations, the details of which are elaborated in our Working Paper submitted to this Review Conference. In this Working Paper, we have enlisted our related activities to promote and implement the goal of nuclear disarmament.

In addition, we have specific proposals, including inter alia, on the necessity of:

Reaffirming that the principles and purposes contained in the United Nations Charter are fundamental to the pursuance of nuclear disarmament and non-proliferation of nuclear weapons.

Implementation of all multilaterally negotiated legally-binding instruments on nuclear disarmament and non-proliferation of nuclear weapons is essential in achieving a nuclear-weapon-free world. Likewise, all states have a legal obligation and political and moral responsibility to pursue in good faith and to bring to a conclusion, negotiations leading to nuclear disarmament in all its aspects under transparent, strict, and effective international control.

Strengthening nuclear disarmament and non-proliferation efforts by respecting and enhancing through ratifying related protocols and removal of related reservations and interpretative declarations to them by concerned States.

Recognizing any use of nuclear weapons would be a crime against humanity and therefore, the need to comply, at all times, with applicable international law, including international humanitarian law.

Emphasizing the importance and validity and also reaffirming the ICJ 1996 advisory opinion about the obligations of State parties under article VI of the Treaty.

Calling upon the nuclear-weapon States that have the primary responsibility in this regard to implement their long overdue obligations on nuclear disarmament.

The establishment, in the CD, of an ad hoc committee on nuclear disarmament and the commencement of negotiations on a comprehensive nuclear weapons convention.

Preserving integrity and universality as well as achieving the fundamental objectives of the Treaty.

Strongly support the establishment of a nuclear-weapon-free zone in the Middle East, in particular by calling on the only non-party to the Non-Proliferation Treaty in the region, to renounce the possession of nuclear weapons, accede to the NPT without precondition, and further delay as a non-nuclear weapon party, and place all its nuclear facilities and activities under the IAEA full-scope safeguards.

The immediate commencement and early conclusion of the negotiation in the Conference on Disarmament of a Treaty banning the production of fissile material for nuclear weapons or other nuclear explosive devices (FMCT).

Pending the total elimination of nuclear weapons, all Non-Nuclear Weapon States should be assured by all the Nuclear-Weapon-States, through effective, universal, unconditional, non-discriminatory, irrevocable, and legally binding international instrument against the use or threat of use of nuclear weapons under all circumstances.

I thank you, Madam. Chair