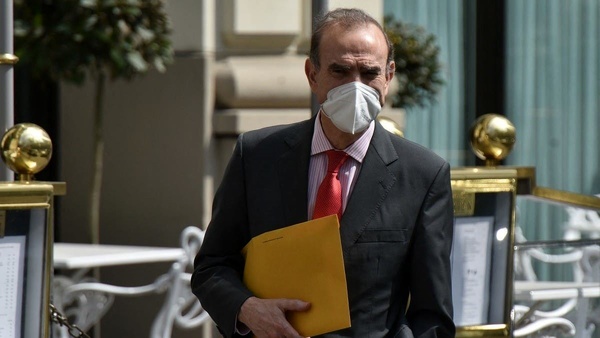 The European Union’s coordinator for efforts to restore the Iran nuclear deal was due in Tehran for Sunday talks, as its foreign policy chief saw a renewed accord in “days”.

Iran has been engaged in negotiations to revive the accord formally known as the Joint Comprehensive Plan of Action (JCPOA) with Britain, China, France, Germany and Russia directly and the United States indirectly.

Parties have signalled for weeks that the negotiations are close to an agreement, but that “political decisions” are required from Tehran and Washington.

“We are very close but there are still some issues pending,” EU foreign policy chief Josep Borrell told reporters on the sidelines of the Doha Forum in Qatar.

“I cannot tell you when or how, but it is a matter of days.”

The comments came as the EU diplomat chairing the Vienna talks, Enrique Mora, was due in Tehran, and as Iran confirmed that dropping its Islamic Revolutionary Guard Corps (IRGC) from a US terror blacklist was among the outstanding issues.

Mora, who coordinates indirect talks between Iran and the US, said ahead of his trip that the visit aimed to bridge the remaining differences.

“Working on closing the remaining gaps in the #ViennaTalks on the #JCPOA. We must conclude this negotiation. Much is at stake,” he tweeted.

Western parties have been pushing for the talks to be concluded “urgently” given the accelerated pace of Iran’s nuclear programme since Washington’s unilateral withdrawal from the deal in 2018.

“The issue of the IRGC is definitely part of our negotiations,” Amir-Abdollahian told state television.

“We have exchanged messages with the Americans in this regard. So this is one of the issues that is still on the agenda”, he said.

Senior Guards officials have told the foreign ministry to “do whatever is necessary in line with the national interests of the country — and if you reached a point (in the negotiations) where the issue of IRGC was raised, the IRGC issue should not be an obstacle for you”, Amir-Abdollahian said.

But he added: “We will never allow ourselves… to tell the US side that we can let goes of the issue of the IRGC, despite the permission given to us by the senior officials.”

The most important outstanding issue with the US “is still the subject of how to delist real and legal Iranian persons from the sanctions list,” Amir-Abdollahian said.

Israeli Prime Minister Naftali Bennett later reiterated his government’s concern that the US would remove the Guards’ listing.

Iran began rolling back on most of its commitments under the accord after the United States unilaterally withdrew in 2018 and began reimposing crippling economic sanctions.

Negotiations have been paused since March 11, after Russia demanded guarantees that Western sanctions imposed following its invasion of Ukraine would not damage its trade with Iran.

Days later, Russian Foreign Minister Sergei Lavrov said during a news conference with Amir-Abdollahian that Moscow had received the guarantees.

Consultations between the Iranian foreign minister and his counterparts had continued since delegations returned to their capitals, state news agency IRNA said.

The 2015 agreement gave Iran much-needed sanctions relief in exchange for curbs on its nuclear programme that would guarantee Tehran could not develop a nuclear weapon — something it has always denied wanting to do.

During the negotiations to revive the accord, Iran has repeatedly called for US guarantees that there will be no repeat of its 2018 pullout.

Washington said on Tuesday that it was now up to Iran to make hard decisions in order to restore the deal.

“The onus is on Tehran to make decisions that it might consider difficult,” State Department spokesman Ned Price said.

“There are a number of difficult issues that we are still trying to work through.”