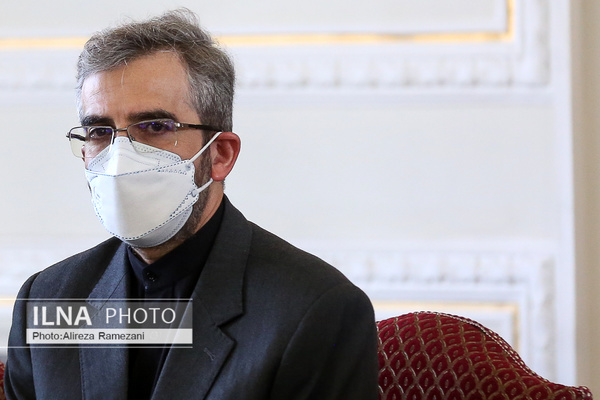 Iranian Deputy Foreign Minister for Political Affairs and top negotiator in the Vienna talks stressed that the pace of reaching an agreement in the ongoing talks depends on the will of the other side.

Ali Bagheri Kani said if the other side accepts the rational positions of the Islamic Republic of Iran, the new round of talks could be the last round.

Given that the new government had been formed and a new team had been assigned to the talks, this round of talks has brought the views and positions of the new government to Vienna, he said, adding, "Accordingly, we have taken into account the views, amendments and proposals of the Iranian team and included them in the negotiating documents and presented to the other side."

He further said that specifically, two documents were important for the negotiations.

"One document related to the lifting of sanctions, which was the main priority and important agenda of the negotiating team. Of course, this priority is not only ours, but also other parties, including some 4 + 1 members such as China which have explicitly stated in the meetings that their priority is in line with that of Iran," Bagheri Kani added.

The Iranian diplomat further said that on the nuclear issue, "we also presented our views and positions on the draft of the sixth round of the Vienna talks" and presented them to the other side, but the difference between the nuclear document and the sanctions lifting document was that the European side did not accept the reforms as the basis for negotiations.

Bagheri Kani emphasized that the Islamic Republic of Iran stood against this irrational position and stated that the positions of the new team should be taken into account and "we will discuss during the negotiations to reach an agreement reached by both sides", but unfortunately "we faced an unjustified resistance" from the European side that did not cause the Iranian team to abandon its principled and legitimate positions.

He also said that during the last week, serious negotiations took place between the parties at different levels until the European side was finally persuaded to accept Iran’s position as a basis for serious and effective negotiations.

In response to a question that if Iran has received a constructive offer from the other side in the talks, Bagheri Kani said that no specific offer was made by the European side.

"They have previously stated that we have suggestions and initiatives on some issues, but during this period of discussions we did not receive any suggestions or initiatives from them," Iran's top negotiator said.