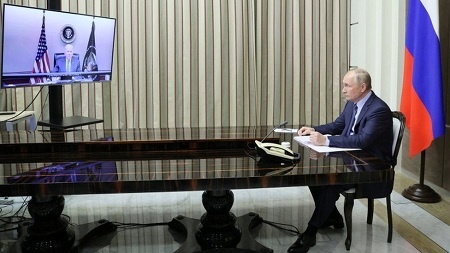 "The state of affairs around the Joint Comprehensive Plan of Action for the Iranian nuclear program has been considered," the Kremlin said in a statement. "The president of Russia noted the importance of its proper implementation as was originally agreed."

"The leaders expressed hope that the talks on this issue, which resumed in Vienna at the end of November, will be constructive and will make it possible to reach decisions that will be acceptable for all participants," the statement went on to say.

The JCPOA on Iran’s nuclear program was signed by the five permanent members of the UN Security Council, Germany, and Iran in 2015 to overcome a crisis around Iran’s nuclear program. In 2018, then US President Donald Trump withdrew from the accord. Incumbent US President Joe Biden signaled Washington was ready to revive the deal. The 5+1 countries, including Russia, the UK, China, the US, Germany, and France are holding talks with Iran on reinstating the JCPOA in its original form.

The seventh round of these talks started on November 29 and ended on December 3 in Vienna. The sides may return to the negotiating table as soon as this week, Iranian media reported.