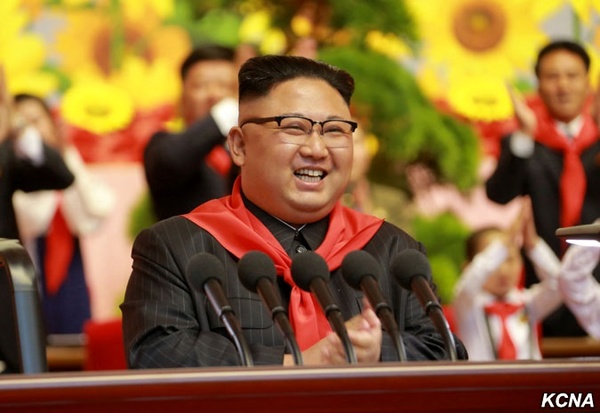 At the 4th Plenary Meeting of the 8th Central Committee of the Workers’ Party of Korea where the direction of the works of the Party and the state in 2022 is discussed and decided, respected Comrade Kim Jong Un said that the Party and the state remain unchanged in their policy to supply all the schoolchildren in the country with school uniforms and stationery at state's expense. And he set forth a task for supplying every schoolchild with high-quality uniforms and new-style bags, and saw to it that the Party Central Committee took an important measure for its implementation.

Such a decision could only be made by respected Comrade Kim Jong Un, who set it as the eternal policy of our Republic to make it unconditional as the first priority if it is for the good of the coming generation, and continues to carve his great statesmanship of love for posterity.

Whenever we look back upon the traces of love for posterity engraved by respected Comrade Kim Jong Un on this land, we can never forget forever his great dedication to our posterity.

The education revolution in the new century declared with the introduction of the universal 12-year compulsory education system, the noble benevolent affection permeated in Pyongyang Maternity Hospital, Okryu Children’s Hospital and Pyongyang Teacher Training College, the stories of love for posterity associated with Mindulle(Dandelion) Notebook Factory, Pyongyang Bag Factory and Pyongyang Children's Foodstuff Factory, the happy laughter of children resounding in children’s camps, baby homes, children’s homes, primary and secondary boarding schools which have been built splendidly all over the country, the new childcare policy formulated in the period of manifold difficulties…

Each and every year passed, which is filled with warm affection and love unknown to the world, clearly shows that our sons and daughters are indeed living under a benevolent care of the father.

Entire people on this land are enjoying a harmonious life helping and leading one another forward in the world of love and in the sea of humanity unfolded by respected Comrade Kim Jong Un. Because of this, they are singing over the century the song of happiness, the paean to the era of the Workers’ Party of Korea, saying “Our father is Marshal Kim Il Sung, our home is the embrace of the Party.”

No wonder even foreign friends who heard the news on the Plenary Meeting of the Party Central Committee praise highly that “Politics of the DPRK run through with the people-centered idea and childcare-centered idea,” and that the “DPRK is the only country where the state provides the schoolchildren with free education and even with school uniforms and stationery.”

In fact, boundless is the fervent love of respected Comrade Kim Jong Un shown to our posterity.

Lunar New Year’s Days are celebrated big in many countries as folk festivals since they bring us recollection of the past one year together with new hopes for the coming year.

Whenever lunar New Year’s Day comes, it is a common practice for everyone to enjoy the holiday with their families, full of optimism and joy. On the contrary, sadness of having lost parents wells up on this day for the children without parents.

But there is no discrimination between children with parents and children without them among the children celebrating the lunar New Year’s Day on this land.

Hereunder is an emotional story told with the lunar New Year’s Day.

10 years ago, respected Marshal Kim Jong Un, who visited Mangyongdae Revolutionary School on the lunar New Year’s Day, warmly said that he found himself here to meet the parentless children who would weep missing the great General Kim Jong Il, and that he would celebrate the holiday together with them, becoming their parents.

The look of the children throwing themselves into the bosom of respected Comrade Kim Jong Un was just like being embraced into their long-awaited father.

Story of love told with New Year’s Day is also imprinted in the morning of the New Year 2015.

On this day, respected Comrade Kim Jong Un visited the Pyongyang Baby Home and Children’s Home. He warmly said he would enjoy the New Year’s Day together with the children, saying that he was so much eager to see children yearning for affection once he had wished all the children of the country brighter future in his New Year Address.

Not only our people but the whole world could hardly refrain from expressing high praise looking at the emotional look of the children who competed with each other to be embraced by him saying they looked forward to seeing him and saying proudly that a new palatial house built by Marshal Kim Jong Un is indeed to their liking.

“Not adults but innocent children are shedding unaffected tears following so faithfully their leader. These tears enable us to envision the future of Korea. DPRK is really the world for children. We truly saw the acme of love for the coming generation.”

People would not believe that 8-year-old school children do sums on addition and subtraction of three- or four-digit numbers which are displayed at 1-second intervals in the twinkling of an eye while singing, dancing and writing a composition at the same time.

It would be more surprising if you heard that children could do sums on addition and subtraction of double-digit numbers read by teachers and hear common chords in a flash while explaining about the robot of their own making in Chinese, English and Russian all at the same time.

Even those who saw with their own eyes the surprising calculation of the children at Segori Primary School under the Pyongyang Teacher Training College find it difficult to readily believe their skills.

Asked about the secret of such surprising skills, the teachers proudly answer that they are the fruition of the 12-year free and compulsory education system and the unique policy of giving priority to primary and secondary education that became to be effectuated by respected Comrade Kim Jong Un.

Respected Comrade Kim Jong Un said that like a firm-rooted tree can bear good fruits, for good talents to be made, it is necessary to intensify primary and secondary education which give basic education, and to invent and introduce new methods of our own style for developing intellectual faculties of children which can be applied in the days of kindergartens and primary schools when the human brain is developed on the most active basis.

He also clarified in detail the orientation and methods for developing the future-oriented education in conformity with the reality of rapid increase in the amount of information and knowledge as well as the global trend of attaching importance to sustainable development of education and capacity-building education.

The experts of Pyongyang Teacher Training College came to pay attention to abacus in the course of deepening their study true to the teachings of respected Comrade Kim Jong Un.

Abacus, one of the handicraft calculation tools had been widely used in our country and other Asian countries for a long time before it disappeared with the advent of electrical calculator and computer.

The experts brought their attention to the fact that the abacus is highly effective in developing right hemisphere of the children’s brain. With this point in mind, they invented the method of developing intellectual faculties of children through the abacus game and proved its advantage after introducing them to the students and children of the schools and kindergartens under the Pyongyang Teacher Training College.

If abacus education is given, it will help create a faculty in the brains which can imagine the abacus board and the up and down movement of abacus balls thanks to combination of repeated movement of two hands and the calculating process of the four rules of arithmetic.

If such a faculty is further strengthened, children can be possessed of high capacity to process information which can receive, preserve and reproduce a lot of information in a short time.

Drawing on the mysterious secret found in the simple calculation tool, the experts created one after another dozens of advanced methods of our own style for developing intellectual facilities such as the virtual reality technology, the augmented reality technology and the robot education technology so as to generalize them throughout the country. Such an effort bears excellent fruits.

Like this, thanks to the extraordinary and energetic leadership of respected Comrade Kim Jong Un, our Juche-oriented education continues to make a rapid progress as required by the new century. This itself provides a sure guarantee for the bright future of our country.

Now in several countries, children who should grow up healthy free from worries under the protection and care of the state and society, are fading away in pain as the targets of social ill-treatment and humiliation. Such reality is drawing serious concern and consternation from the international society.

What is more serious is the fact that this is a commonplace in the Western countries that make wide publicity about their “public welfare” and “equality of all”.

According to a recent statement by a French social organization, over 50,000 children are living on streets or in temporary dwellings in France.

In Japan, the number of the cases of child maltreatment hit an all-time high in 2021, and in the United States, one quarter of children throughout the country were maltreated by their parents.

In Canada, a case has been revealed to prompt a big public outrage: a vast number of indigenous children were forced to be separated from their families and live in boarding houses built for the purpose of making them to “adapt to the white society” where they suffered from maltreatment and sexual harassment, and lost their lives from malnutrition and every kind of diseases or went missing.

Children of delicate frames become the prime targets of maltreatment and crime in the capitalist system where human love and affection are trampled underfoot and faded away by money-is-almighty principle. They perish in misfortune and suffering, forsaken by their family and society even before they grow up.

However, children in our socialist system, who are regarded as the future of the motherland, are growing up enjoying all blessings under the protection and care of the state.

Even at the time when we have a series of trials and challenges unprecedented in history, our country is continuously adopting the great policies and measures for the children, placing the work for posterity as the one of the greatest importance.

Our children are born into baby palaces, and grow up in palaces of learning without even knowing of the words “medical fee” and “school fee”.

The bright faces of the children enjoying dairy products every day with happy smiles and rejoicing over presents of love on public holidays!

We can hear schoolchildren do not stop their laughs at the Children’s Camps erected with brilliance in Munchon and other excellent locations. When we go to the Sci-Tech Complex, we can see the children’s eyes as clear as the morning star conquering the uncharted world in the hall of children’s dream.

In not too distant future, our streets and villages will be brighter than ever as the children would go to school, wearing new stylish uniforms and new satchels on their shoulders that they received from the state.

We foresee a better tomorrow, a brighter future to be unfolded on this land in today’s reality where the happy and delightful laughter and loud singing voices are reverberating far and wide under the warm care of Comrade

Kim Jong Un, President of the State Affairs who regards children as the kings and queens of the country and is willing to even pick a star from the sky for them.