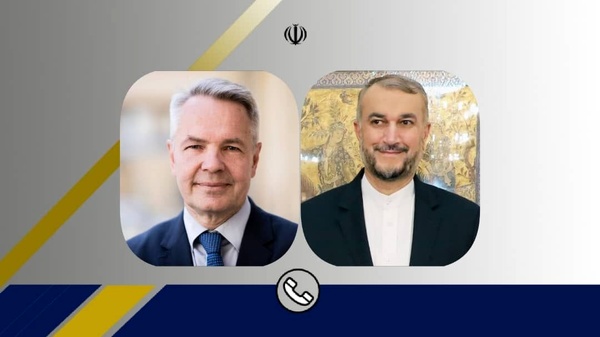 Amir Abdollahian made the remarks during a phone call with his Finnish counterpart Pekka Olavi Haavisto.

He referred to the recent visit of the Finnish Foreign Minister to Tehran and the agreements made by both sides and offered readiness to expand the path of cooperation between Iran and Finland.

Criticizing the US inaction and pointing to Iran’s seriousness, he emphasized Tehran's will to reach a good, strong, and lasting agreement.

Referring to the support for the continuation of the ceasefire in Yemen, he stressed the need to lift the complete humanitarian siege of the country and resolve the Yemeni crisis within the framework of the Yemeni-Yemeni dialogue.

Regarding the war in Ukraine, he said: "The Islamic Republic of Iran is against war and calls on both sides of the conflict in Kyiv and Moscow to dialogue and end the war, and considers the solution in diplomacy and dialogue."

He expressed hope that a favorable agreement would be reached in the Vienna talks.

He also stressed developing cooperation between Tehran and Helsinki.

Touching upon the Ukraine crisis, he expressed hope that the Russian-Ukrainian talks, with the help of various countries, including Iran, would help resolve the crisis peacefully.