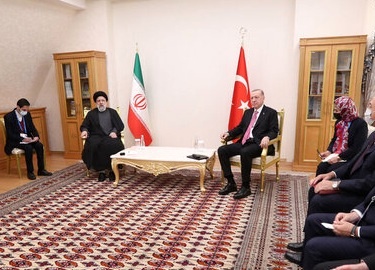 Iran's Foreign Minister Hossein Amirabdollahian in a Twitter message referred to the recent meeting between Iranian and Turkish presidents on the sidelines of ECO Summit in Ashgabat, saying high commission meeting will be held during President Recep Tayyip Erdoğan trip to Iran.

The meeting of the presidents of Turkey and the Islamic Republic of Iran in Ashgabat took place in a very friendly and cordial atmosphere, Amirabdollahian wrote in his Twitter account adding that both sides agreed to talk about the comprehensive development of relations and the removal of certain obstacles.

The relationship between the two countries is historical and the leaders agreed to convene a high commission meeting during President Erdogan's visit to Tehran, he noted.

Earlier on Sunday, Iranian President Ebrahim Raisi in a meeting with his Turkish counterpart, Erdoğan, said that the issues of the region must be resolved by regional countries through dialogue.

Iran and Turkey can bring the economic and political relations between the two countries closer to the strategic level by improving the current level of trade and exchanges, Raisi said.

Referring to the wide and diverse areas of cooperation between Iran and Turkey in various sectors, including energy, banking and monetary affairs, and trade and commerce, the Iranian President added, "We must facilitate the development of economic ties and in this regard, preferential tariffs can be reviewed".

Erdoğan, for his part, in the meeting said that his country considers it necessary to develop and strengthen bilateral and regional ties with the Islamic Republic of Iran, stressing, "We can make a leap in the relations between the two countries, especially in the economic sectors."

"The White House is training and arming all terrorist groups in the region, including ISIS and the PKK, and providing them with terrorist equipment and tools to create insecurity," Erdoğan said, mentioning, "We consider joint cooperation necessary for the establishment of peace in the region."