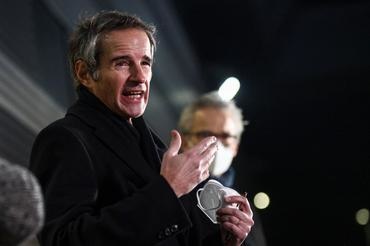 Iran's Foreign Ministry Spokesman Saeed Khatibzadeh said on Monday that the head of United Nations nuclear watchdog would travel to Tehran soon to meet with the foreign minister and the head of Atomic Energy Organization of Iran (AEOI).

Speaking in his weekly press conference, Khatibzadeh said that Director General of the International Atomic Energy Agency (IAEA) Rafael Grossi has close relations with the AEOI and officials in Iranian Embassy in Vienna.

Iran has invited Grossi to visit Tehran and has offered a date for his trip, he said, adding that he would soon be in Tehran to meet with Iranian Foreign Minister Hossein Amirabdollahian and the head of the AEOI Mohammad Eslami.

Regarding Vienna talks, he said that an acceptable agreement would be that the Donald Trump era and the resumed JCPOA-related sanctions be lifted in entirety, adding that there were disagreements between the JCPOA participants in the six rounds of talks held in Vienna, however.

We have heard of the US intention to rejoin the JCPOA, the Spokesman said, but what is important to us is to be ensured of lifting of sanctions and its verification.

Asked about launching of Ilisu Damn in Turkey and Iran's water right, the Spokesman said that the issue would be raised in the meetings with the Turkish foreign minister, warning that constructing such damns has environmental impacts for all the countries in the region.

On the statements made by European participants of the JCPOA that the talks in Vienna should be resumed from where they were left five months ago, Khatibzadeh said that this was not important to Iran because the only thing that matters is how to reach a good deal.

He refused to give details on the redemption of 3.5 billion dollars of Iranian funds abroad, referring to sanctions-related concerns.

Khatibzadeh warned Iranians not to fall in the trap of smugglers who get the money and leave immigrants in dangerous areas; however, the spokesman added, Iranian embassies in different counties reach to Iranian immigrants in trouble to help them regardless of why they chose to leave Iran.

Asked if US negotiations with China has any impact on Iran's relations with China, the Spokesman pointed to the United States' unilateral approach to international relations, saying that if the US turns to integration with the global community and accepts that sanctions shouldn't be leveraged against countries like China, the world would be a better place.

The diplomat also touched on the situation in Afghanistan, saying that the growth of extremism and terrorism which is embodied in the worst form in attacking worshipers was a source of great concern for Iran and must be addressed by the caretaker government in Afghanistan.

On US President Joe Biden's statements on reducing oil purchase from Iran, Khatibzadeh responded that Washington has tried to isolate Iran from the global market, but it has achieved lesser results every day.

That's because of the Iranian elite youth who see no barricades against themselves and the Americans would never catch up with them, the diplomat said.

He said that Iran is closely watching whatever Biden does and says and that Iran would move the talks forward and ask for assurances on this basis.