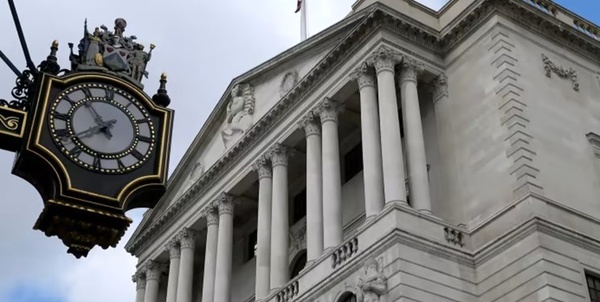 The Bank of England warned that the cost-of-living crisis could plunge the economy into recession in 2023 as it increased interest rates to tackle soaring inflation, expected to top 10% later this year.

Threadneedle Street’s monetary policy committee (MPC) voted by a majority to raise its base rate from 0.75% to 1%, lifting the cost of borrowing to the highest level in 13 years, as it sounded the alarm over the risks from spiraling inflation exacerbated by Russia’s war in Ukraine, The Guardian reported.

Despite the growing risks to the economy as households suffered among the biggest annual declines in their income for decades, the Bank said a quarter-point rise was warranted to block persistently high rates of inflation from taking hold, as the shock from soaring energy costs rippled through the global economy.

Issuing a downbeat verdict as voters went to the polls in local elections, the Bank warned Britain was on track for years of meager economic growth as households cut back their spending to deal with the heavy blow to living standards.

Against a backdrop of soaring international energy prices, household gas and electricity bills are set to rise by 40% in October, after the government chose to offset only some of last month’s record rise using measures outlined in Chancellor Rishi Sunak’s spring statement.

With the chancellor coming under growing pressure to launch a fresh support package for householders, the Bank said consumers tightening their belts to deal with the cost of the living crisis was likely to push the economy into a sharp contraction in the fourth quarter.

Although a modest recovery is expected at the start of next year, ensuring two consecutive quarters of falling GDP – the technical definition of a recession – is likely to be avoided, the Bank warned Britain’s economy would shrink by 0.25% over the course of 2023 as a whole, in effect a slow-burn recession.

Laying the ground for a grim economic backdrop before the next general election, the Bank said the hit to living standards and weaker growth would cause a sharp rise in unemployment to 5.5%, surpassing the jobless rate during the early stage of the COVID pandemic.

With inflation expected to peak above 10% in the final months of 2022 – the highest level since 1982 – economists said the Bank was likely to continue raising interest rates to prevent spiraling consumer prices from becoming embedded in the economy.

Reflecting the risks as inflation headed to five times the Bank’s official target rate of 2%, three of the MPC’s members – Jonathan Haskel, Michael Saunders, and Catherine Mann – voted for a larger half percentage point rise in borrowing costs in a 6-3 split on the rate-setting committee.

Financial markets anticipate the Bank could raise interest rates as high as 2.5% next year. Basing its economic forecasts on this judgment, the Bank said inflation would probably fall back close to its target rate within two years and would drop to just 1.3% within three.

The US Federal Reserve raised interest rates by 0.5 percentage points on Wednesday, the biggest single increase since the turn of the millennium, in order to combat surging inflation as the shock from the COVID pandemic and the invasion of Ukraine rippled through the global economy.

The interest rate rise to 1% opened the door to the MPC launching the sale of some of its £875bln portfolios of UK government bonds, built up through its quantitative easing stimulus program since the 2008 financial crisis. Although the threshold for active bond sales has now been met, the Bank said it would order staff to draw up plans for the disposal program and would provide an update in August.