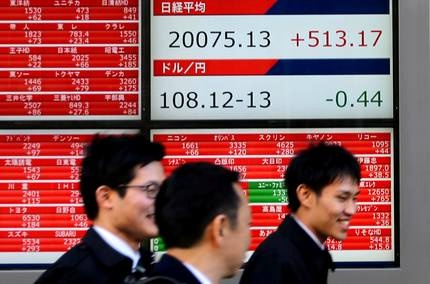 Asian shares were mixed on Friday morning as slight gains in China were balanced by declines elsewhere and investors globally turned cautious ahead of a long-awaited speech by Fed Chair Jerome Powell.

Remarks from the Federal Reserve's more hawkish policy makers and a deadly attack in Afghanistan also subdued sentiment and helped the dollar gain against a basket of its peers.

However, in a reversal of recent weeks where Chinese stocks weighed on the region, Chinese blue chips (.CSI300) gained 0.57% after China's central bank made its biggest weekly cash injection into the banking system since February. read more

"There are three things that are conspiring at the moment to sap sentiment," said Kyle Rodda, an analyst at IG markets, referencing a weak lead from Wall Street after the attack in Afghanistan, the fact Asian markets had been lagging this week because investors were nervous about the potential for future regulatory crackdowns in China, and caution ahead of the upcoming Jackson Hole Symposium.

Powell is set to speak at 1400 GMT in the Kansas City Fed's central banking conference, an event normally held in Jackson Hole, Wyoming, which has been often used by Fed policymakers in the past to provide guidance on their future policy.

Traders will analyse Powell's words for any hints about when the Fed will begin tapering its asset purchasing programme.

Analysts at RBC said in a note that while much of the summer had been spent waiting for the event, there was "skepticism that the Fed will provide more specific information around a timetable ... amidst a rise in Delta variant COVID cases."

The yield on benchmark 10-year Treasury notes was 1.3441% down from a two-week high of 1.375% set the day before, as traders were cautious ahead of Powell's speech.

The dollar when measured against a basket of currencies has gained a little from Thursday's lows. The euro traded at $1.1747, having eased from the previous day's high of $1.1779 as a survey showed weaker consumer sentiment in Germany.

U.S. crude ticked up 0.34% to $67.65 a barrel. Brent crude rose 0.25% to $71.27 per barrel, resuming this week's rally after taking a rest on Thursday, as energy companies began shutting production in the Gulf of Mexico ahead of a potential hurricane forecast to hit on the weekend.