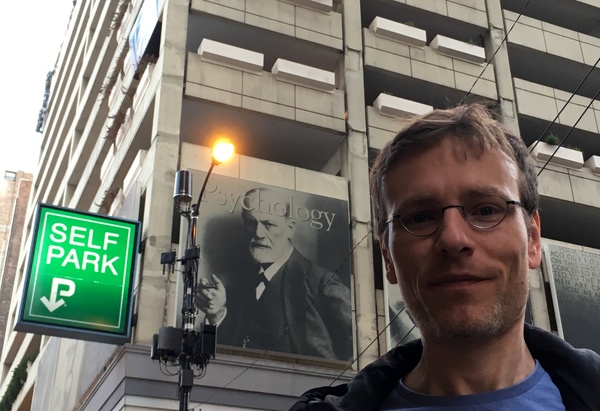 The immediate aftermath of the capitalist crisis of 2008 catalyzed the radical Left’s split between, on the one hand, a reinvention of the old form of anti-capitalist struggle and socio-economic organization, and, on the other, an imagining of new forms of political and economic existence.

Simon Hajdini is a research fellow in the Department of Philosophy at the University of Ljubljana, Slovenia. He is the author of numerous research articles in psychoanalysis, German idealism and contemporary continental philosophy, as well as two books in Slovene: On Boredom, Laziness and Rest (Analecta 2012) and What’s That Smell? Toward a Philosophy of Scent (Analecta 2016).

ILNA: In a way, the fall of the Berlin Wall was not only the symbol of Eastern Bloc failure but the 20th century Left itself. Can we still be loyal to that form or shall we look for new forms?

In general terms, your claim holds water, and up until very recently, you could hardly find a radical Leftist that would disagree with it. Today, however, this general Leftist denouncing of 20th century Leftist politics with one broad brushstroke, as if sub specie aeternitatis, should strike us as increasingly symptomatic: It signals the radical Left’s struggle for ideological legitimacy. Consequently, and to answer your question, the Left has long since abandoned the loyalty to the old form, but remains loyal to proclaiming its failure: “Love thy failure as thyself”— such seems to be its sanctifying motto, and as such, it should be dropped, perhaps in favor of Beckett’s old credo: “Try again, fail again, fail better.”But to go back to your question;  The immediate aftermath of the capitalist crisis of 2008 catalyzed the radical Left’s split between, on the one hand, a reinvention of the old form of anti-capitalist struggle and socio-economic organization, and, on the other, an imagining of new forms of political and economic existence. In essence, the two sides of the split bear the old names of socialism and communism. The coexistence of the two is troubled, to say the least. Today’s democratic socialism is denounced by the proponents of communism as not radical enough, as sticking to the word socialism so as not to truly disturb the order of political appearances, while the new socialists are denouncing the idea of communism as just that: a mere idea with no real socio-political consequences. It seems clear to me that both camps got their signals crossed. In our times, the word communism has been stripped of its political charge-with the disintegration of the Eastern Bloc, one could say, communism has been “discharged” from the stage of history. However, from the point of view of capitalist oligarchs and their political representatives, “socialism” took its place to become the scare word of the day. On the other hand, the democratic socialists tend to reduce the idea of communism to a kind of anti-capitalist romanticism, a distant and ultimately empty utopia that has no relation to and usefulness for real political struggles. I violently disagree with such an assessment, and for two reasons. First, the thinking through possible forms of communist social and economic existence is a difficult necessity. Marx provided some guidelines, but no real concept of communism. And second, are ideas or utopian narratives really redundant or obsolete? Is not the sinister “idea” of a “utopian” prospect of a prosperous society without antagonisms, immigrants, refugees, etc., precisely what is getting the far Right elected today? The radical Left needs a new utopia. The calls for democratization, transparency of political decision-making, etc., are not cutting it.

ILNA: Mainly, the fall of the Berlin Wall is considered as an endpoint for the course of history. Does this logic still hold true, especially in the “age of extremes” that we live in?

Since its first formulation (which was its second formulation, with Fukuyama taking his cue from none other than Alexandre Kojève), this thesis was met with violent rejections. A year after the publication of Fukuyama’s The End of History in 1992, Derrida (hardly a card-carrying communist) pointed out the gaining relevance of Marx after the fall of the Berlin Wall and the demise of communism. State socialism might be dead and buried, but pronounced antagonisms shine through the cracks of the new liberal-democratic triumphalism in the form of wars, extremist violence, capitalist oppression, unemployment, criminalizing inequality, and ever-expanding exclusions. But the rejections weren’t merely “intellectual.” Soon, they began to inflect the people’s attitudes of nostalgia for “the good old days.”Just recall Habermas’s term for the so-called revolution of 1989 as the heir to the revolutions of 1848. He called it die nachholende Revolution. The term was intended to describe the “catching up” of the East to the Western developments in terms of democratization and the market economy. I’m tempted to say that for the majority of people, who became rapidly disillusioned by the new reality of global capitalism, “the catch-up revolution” ultimately deflated to a “ketchup revolution”: The living standards fell, but at least now we get free ketchup with our burger!

ILNA: Is the world after the Berlin Wall, as the liberals claim, a world without ideology or has it only taken perverse forms?

According to Fukuyama, the end of history designates, in equal measure, the global triumph of liberal-democratic capitalism as an unsurpassable horizon, and the end of ideology. Here, the term ideology is understood in pre-Marxian terms of a system of principles that the subject can either accept or refuse, but always with a fully conscious awareness of this acceptance or refusal. If understood in this sense (which is by no means exhaustive of the notion of ideology), it is absolutely clear today that “the end of history” brought about an immediate resurgence of counter-revolutionary ideology designed for the new post-political liberal age. Just think of Samuel Huntington’s ominous vision of “the clash of civilizations” as the paradigm of post-political “culturalization of politics”, to use Slavoj Žižek’s apt designation. It is these reactionary, nativist, communitarian, identitarian ideas that have, in the aftermath of the 2008 capitalist crisis, provided the discursive grounds for today’s anti-immigrant Right and its hostile identity-discourse. So far, the opposing side, either liberal or socialist, was unsuccessful in keeping up with it. The crisis caught the Left completely off guard, with no truly persuasive egalitarian narrative at hand that could compete with the simplicity of what is ultimately a displaced but essentially anti-Semitic ideological program of the far Right. Left-wing populism is not an alternative. The old liberal distrust towards it as being inherently proto-fascist has been amply reaffirmed. In this respect, one only needs to think of neo-fascist political parties, such as CasaPound in Italy, to see that their influences are a mishmash of the identitarian celebration of the white, Christian Europe, xenophobic anti-immigrant rhetoric, traditional familial ideology, and anti-Americanismpaired with a support for Lebanese anti-imperialists and Hezbollah. All of this while drawing influences from the likes of Hugo Chávez and Che Guevara.

ILNA: What should today’s Left do in the face of this fall? What does this event provide for critical thinking?

You won’t like my answer, but it’s only a didactic one. If the 20th century read Marx’s Capital so as to either scholastically legitimize the grip on power of Socialist states, or as a practical compendium for the communist revolution to come, while at the same time falsely denouncing Hegel’s Philosophy of Right as a proto-fascist utopia, today more than ever we should read Capital as a theoretical, even speculative, text and turn for practical guidance to Hegel’s vision of the State.