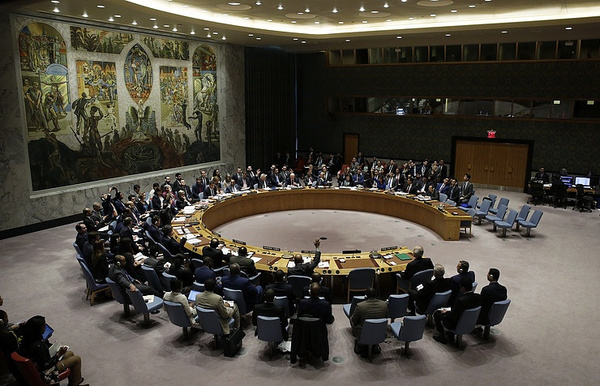 Negotiations on the UN Security Council draft resolution on Syria submitted by France, the UK and US are scheduled to begin on Monday, April 16, a Western diplomatic source informed TASS.

"The talks will begin on Monday," the source said, declining to specify when the draft resolution’s co-authors are going to put it to vote.

AFP earlier reported that the Western trio had handed over the draft document to the Security Council member-countries, which condemns the use of chemical weapons in Syria, including the unconfirmed case in Douma on April 7, and provides for setting up a mechanism to investigate such incidents. The draft document prepared by France urges the Syrian government to cooperate with the Organization for the Prohibition of Chemical Weapons (OPCW).

The document also refers to the humanitarian situation in Syria demanding a ceasefire and access to the population for international organizations to provide assistance, along with a political settlement. The draft resolution, specifically, pointed to the need for Damascus’ constructive participation in UN-brokered negotiations without any preconditions.

On Saturday, the UN Security Council held an emergency meeting initiated by Russia in the wake of the unauthorized strikes on Syria carried out by the US, the UK and France in response to the alleged chemical weapons attack in Douma. The participants in the meeting considered the Russian draft resolution, which condemned UN Charter violations by Western countries and demanded that they refrain from such actions in the future. The draft resolution was not passed, as it did not secure the required number of votes.