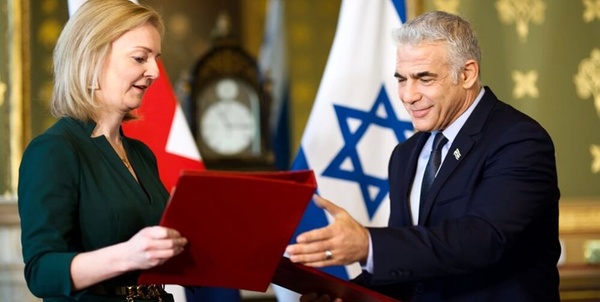 The special rapporteurs said relocating the British embassy to Al-Quds would break with international law and UN resolutions and reverse decades of British policy, The Middle East Eye reported.

Truss, on the sidelines of the UN General Assembly in New York on Wednesday, told her Israeli counterpart Yair Lapid that she is reviewing the embassy's current location.

In a three-page letter sent to UK Foreign Secretary James Cleverly on Tuesday, Lynk as well as Ardi Imseis, who worked for 12 years at the UN Relief and Works Agency for Palestinian Refugees (UNRWA), voiced their concerns on the potential move.

"We write, as friends of the United Kingdom to say that there is nothing to review: the British Embassy should stay in Tel Aviv unless and until there is a comprehensive peace agreement between the Israelis and the Palestinians with Al-Quds as the shared capital of the two states," the letter, which was seen and reported by Middle East Eye read.

Palestinians expressed their outrage on Thursday over the suggestion to relocate the embassy.

Mustafa Barghouti, secretary general of the Palestinian National Initiative Party, said the British prime minister belongs to the “pro-Zionist” conservatives and is known for volte-face on her stances.

Moreover, he stated that Truss and her friends were trying to win the support of the Jewish community in Britain. Barghouti expressed that he was not surprised by the move, saying that “the positions of this British government are against the interests of Palestinian people”.

He also doubted the UK will succeed in moving the embassy because of “fierce opposition by the friends of Palestinians in Britain”.

Also on Friday, the Palestinian Ministry of Foreign Affairs and Expatriates said that the possible move by the UK would “amount to complicity in Israel’s illegal annexation of the city and relentless attempts to assert sovereignty, including through war crimes of forcible displacements, demolitions, and control over holy sites", it said.

The controversial decision would follow in former US president Donald Trump’s footsteps. Trump sparked controversy by officially recognizing Al-Quds as the Israeli ‘capital’ in December 2017, before moving the US embassy there from Tel Aviv in May 2018.

Israel lays claim to the entire Al-Quds, but the international community views the city’s Eastern sector as occupied territory and Palestinians consider it the capital of their future state.