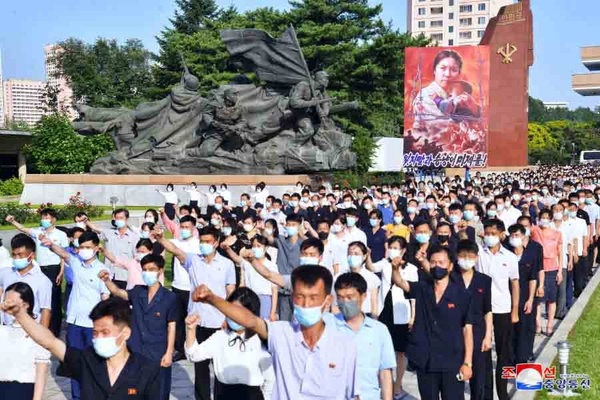 Mass rally took place at the plaza of the Victorious Fatherland Liberation War Museum on Saturday on the lapse of 72 years since the U.S. imperialists ignited a war of aggression against the DPRK.

The speakers vehemently denounced the U.S. imperialists for provoking the Korean War to nip in the bud the young DPRK less than two years after its foundation and perpetrating the most hideous massacre and barbaric destruction unprecedented in the world war history.

Saying that the ravages of war inflicted by the U.S. imperialists upon the Korean people teach a lesson that it is imperative to have matchless power in order to protect the sovereignty of the country and the wellbeing of the people from the enemy invasion, the speakers noted that had their country been as strong as now, its people would not have suffered the misfortune and pain of June 25.

We should bolster our politico-ideological strength and military edge in every way to prevent the grudge-filled history from repeating itself and to make any force be aware that it will have to pay dearly for attempting to infringe upon the security of our country, they said.

They stressed that if the U.S. imperialists dare provoke the DPRK again, oblivious of their bitter defeat in the 1950s, the latter will mercilessly annihilate the imperialists by mobilizing all the invincible physical means it has so far bolstered up.

June 25, 1950 is recorded in history as a day of blood that can never be forgotten nor healed for the Korean people.

That day the U.S. imperialists ignited the Korean War in a bid to nip the DPRK in the bud and use the whole of Korea as a springboard for invading the continent to dominate the world.

Owing to the aggressors' indiscriminate bombing and shelling, everything in the DPRK was destroyed and a large number of people were killed.

The graves of 400 mothers and 102 children in the Sinchon area and other historical evidence preserved all over the country disclose the U.S. imperialists' heinous genocide.

Under the wise guidance of President Kim Il Sung, an iron-willed commander, the civilians and servicepersons of the DPRK won the Fatherland Liberation War, inflicting a shameful defeat on the U.S. imperialist aggressors.

However, the U.S. imperialists, instead of drawing a due lesson from it, have persistently attempted to provoke another war for decades, not giving up their wild design for aggression on the DPRK.

Upset by the ever-growing national strength of the DPRK, they are now getting hell-bent on the anti-DPRK aggression moves as never before, in alliance with the south Korean puppet forces and the Japanese reactionaries.

Such insolent behavior of the U.S. fans the anger and revenge of the Korean people.

In an interview with KCNA at the Victorious Fatherland Liberation War Museum, Kim Un Hyok, a student of

Kim Chol Ju University of Education, said: The U.S. has gone to extremes in its anti-DPRK scheme to topple our idea and social system. Such scheme will rather result in increasing our state's absolute power, and the U.S. will not escape from its fate destined to sink like the setting sun as it was defeated in the last Korean War. -0-

Nearly 70 years have passed after the end of the Korean War provoked by the U.S. imperialists, but the scar of this tragic war still remains unhealed in the DPRK.

Over the last decade alone, many unexploded bombs and shells, dropped and fired by the enemies during the war, have been found in the capital city of Pyongyang and other parts of the DPRK.

Explosive removers of the then Pyongyang City People's Security Bureau discovered dozens of bombs at the sites for construction of the Munsu Water Park and the Mirim Riding Club in 2012 and six 250-kg bombs and over 900 shells at the construction site of Mirae Scientists Street in 2014.

In 2020, 50 unexploded shells were detected during the ground excavation project for the Pyongyang General Hospital.

The facts clearly show how cruelly the enemies behaved to devastate the DPRK during the war.

A large number of explosives, including a 250-kg bomb and various kinds of mines and incendiary bombs, were detected in Kangwon Province during the construction of livestock farming base in the Sepho area. In particular, a germ bomb, forbidden under the international law, was found in Murung-ri of Ichon County.

During the war, the U.S. imperialists showered many butterfly bombs and mortar shells on Kaesong City in a bid to destroy excellent historical cultural relics of the Korean nation. Scores of such bombs and shells were detected in the city.

One of large bombs, dropped by the U.S. imperialist air pirates to destroy roads, railways and bridges in the period of war, was removed from the section of ground excavation for Uan Dam of Huichon Power Station No. 10 in late February of 2014.

Besides, more than 760 explosives were detected and removed from Kumgang and Kosong counties in Kangwon Province. Among them are eight 500-kg bombs and ten 250-kg bombs. And several thousands of blind shells were found in different parts of South Hamgyong Province in the first half of 2021.

Those explosives go to prove once again and evidently that the U.S. imperialists are notorious murderers and peace wreckers.