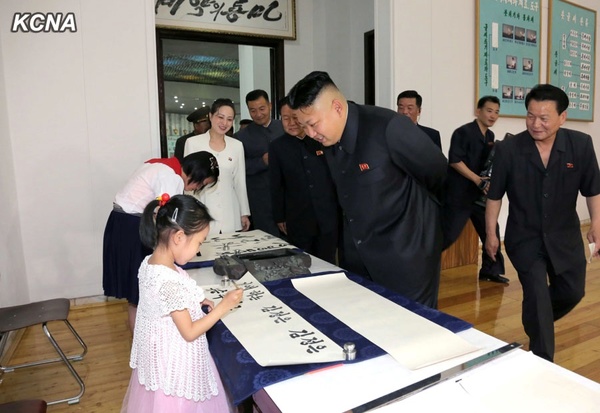 On June 10, 2012, 10 years ago, the respected Comrade Kim Jong Un published an immortal classic work “On Improving and Strengthening General Secondary Education”. Thus, he provided an immortal guideline for shining brighter our motherland as a country of education and a talent power.

The work of the respected Comrade Kim Jong Un is of an epochal significance in firmly preparing our new generations as successors who would embrace the bright future of the country by developing the primary and secondary education onto the highest level.

The respected Comrade Kim Jong Un stressed that excellent talents can be brought up only when general secondary education –  the education which provides students with basic education – improves in line with advancing era and the development of science and technology.

As the respected Comrade Kim Jong Un put forward the unique idea of making all people be well-versed in science and technology and introduced the universal 12-year compulsory education, the whole country is connected to science and technology dissemination network, large numbers of junior and senior middle schools have been renovated and repaired, and the contents of education have become practical, synthesized and modernized according to kinds of schools and subjects.

After witnessing the ever-changing educational environment of our country, numerous foreigners have said that “the DPRK is making a dash for a civilized socialist country on the basis of the advanced educational system.” A newspaper of one country reported as follows: “The DPRK has already reached a considerable level in civilization. When we look at education alone, the regular educational system and the study-while-working system are advanced. What shouldn’t be missed is that all education in the DPRK is free of charge.”

As the firm-rooted tree bears ripe fruits, the children and youth in our country are growing into good talents possessed of noble mental and moral character as well as versatile knowledge of science and technology, receiving ideal education thanks to the socialist education system.

Thanks to the wise leadership of the respected Comrade Kim Jong Un who regards the education of the rising generation as a patriotic work of lasting value for prosperity of the country and nation, DPRK will ever shine as a country of education and a talent power.

-Affection Grows Stronger Even in A Difficult Time

From the ancient times, it has been said that no sadness is greater than that of orphans.

Sadness of orphans is the one of not having parents. It is a yearning for warm love from parents.

According to recent press report by one country, approximately 200,000 children lost one of their parents due to the pandemic in the U.S. in early April this year. And most of the orphans were not provided with necessary assistance including education, nutrition and human rights protection, resulting in the serious “orphan crisis”.

Conversely, orphans are fully enjoying their happy life as usual in our country, free from sadness of not having parents even under the greatest emergency anti-epidemic system.

In mid-May, vehicles fully loaded with fish arrived in succession at all the baby homes, children’s homes, primary and secondary boarding schools across the country.

Although he was busy leading the anti-epidemic war to victory, the respected Comrade Kim Jong Un did not put the orphans out of his mind even for a single moment and took measures of love to provide them with fresh fish, concerned lest they would lose their appetite or not find fish dish even for a meal.

The respected Comrade Kim Jong Un fathomed the hearts of the orphans yearning for affection than anybody else. He ensured that the Party and state bring them up cheerful and upright in place of their parents. He is showing meticulous attention and care even about their nutrition, to say nothing of their education, health and living conditions.

Thanks to the love of Comrade Kim Jong Un, warmer and greater than that of their real parents, children are growing well in the best conditions and environment being supplied with dairy products, fruits, snacks and fish.

Hence, a Russian Internet homepage posted a following article about the children in the baby homes and children’s homes in our country:

“In every country, children without parents have been considered as the beings showing the darkest side of the state and society.

But orphans in the DPRK are enjoying their life receiving all privileges and immunities.

We cannot find even any shadow on the faces of children who are laughing and playing to their hearts’ content free from cares and worries. The future of Korea is really bright.”

People in the capitalist countries are writhing in extreme anxiety and despair as they were faced with orphan crisis as well as with the serious health crisis, unemployment crises, and hard life by the spread of malignant virus. But the windows of baby homes and children’s homes in our country are overflowing with flavor of the sea and the fruit, and the laughter of children.

As we hold up the respected Comrade Kim Jong Un, the true father of all the children of the country, their laughter and song will reverberate far and wide on this land.

-Holiday of “Kings and Queens” – Unique In The World

In Juche Korea, Children are held up as “kings and queens” of the country.

Whenever June comes around every year, our “kings and queens”, the synonym for envy of world people and the symbol of happiness, commemorate their holiday.

June 6th is the founding anniversary of the Korean Children’s Union, the day when all the parents and people across the country are warmly congratulating the members of Children’s Union who are giving full play to their dreams with the warm blessings of the sun without anything to envy in the world.

The founding anniversaries of the Korean Children’s Union are marked with the warm love of President Kim Il Sung and Chairman Kim Jong Il who dedicated themselves to the development of the Juche-based children’s movement.

President Kim Il Sung personally founded the Korean Children’s Union on June 6th, 1946, though he was preoccupied with the work of building a new country. He blessed the union members, saying that he hopes they grow up in good health into treasures of Korea as well as masters of a new Korea and learn hard to become heroes who would build up a new democratic Korea. During the whole period of his great revolutionary lifetime, he bestowed boundless love and affection on the union members, becoming himself a friendly teacher of schoolchildren and a caring parent of children on every occasion of the founding anniversary and the Congress of the Korean Children’s Union.

Gifted with the President’s love for posterity and the future, Chairman Kim Jong Il saw to that the 20th founding anniversary of the Korean Children’s Union had been commemorated with a fireworks display which was available only for major holidays of the state, saying that for the “kings and queens” of the country, even a star should be picked from the sky.

On the occasion of 45th anniversary of the Korean Children’s Union, he personally sent to the participants of the Congress a congratulatory message of the Central Committee of the Workers’ Party of Korea as well as valuable presents to be handed down through generations, marking a significant milestone in history of children’s movement. His smiling face at that time still remains deep in the hearts of union members and our people.

As we hold high the respected Marshal Kim Jong Un who carries on the noble outlook on posterity kept by the great leaders who devoted their all for the future of the revolution, the members of the Korean Children’s Union are now held dear as the most precious treasures of priceless worth and growing into strong pillars of the socialist Korea. The respected Marshal Kim Jong Un who gives everything possible to the union members, regarding them as the entirety of hope and future, made it a tradition to commemorate the founding anniversary of the Korean Children’s Union annually on a large scale and made his presence at the  joint national meeting of the Korean Children’s Union in celebration of its 66th founding anniversary, 7th and 8th Congresses of the Korean Children’s Union and wished them bright future, saying that they should grow up into true sons and daughters and child revolutionaries of the socialist motherland. He called to the Congress the union members who were still in pains of having sudden loss of Chairman Kim Jong Il who was believed in as in heaven. He also arranged ships and airplanes of love to make sure the delegates living on the far-flung islands and at the out-of-the-way village in an alpine region arrive on time.

This story will be handed down forever along with the history of the Korean Children’s Union.

For children, the greatest pride and happiness are the ones of having the best father and living with the father’s blessings.

Indeed, the founding anniversary of the Korean Children’s Union is a significant holiday when all the children of the country are celebrating their birthdays holding high the greatest and the friendliest father in the world. It is also a precious holiday for all parents, grandparents, older brothers and sisters to join in celebrating the birthdays of their cute sons and daughters, grandsons and granddaughters and younger brothers and sisters and wish bright future for them.

Hence a foreign personage once highly praised as follows:

“New generation of the DPRK is growing up as the pillars of the county under the warm care of Comrade Kim Jong Un. The Korean children are happy as they are living in the great bosom of love for the posterity.

Thanks to the precious holiday which was proclaimed by the great leaders and being glorified by the respected Comrade Kim Jong Un, the contingent of children is vigorously growing up. Among them are young heroes who sacrifice their lives to guard the WPK Central Committee at the cost of life; young talents who acquired broad knowledge to become the world-famous scientists and inventors, thus fully displaying the honor of the nation on the international arena with their excellent talents; praiseworthy young patriots who dedicate their body and soul for the socialist country.

Our Party and people are gaining great strength and looking forward to the bright future of the country from the trustworthy sight of the Union members.