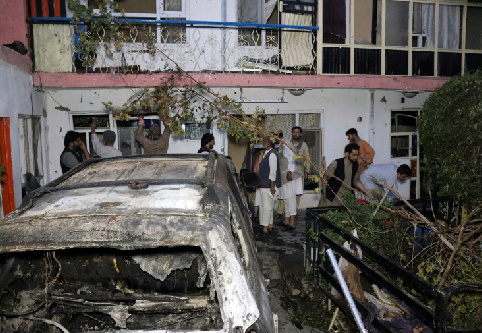 US Defense Secretary Lloyd Austin has decided against disciplining any members of the United States military for an August drone attack in Kabul that killed 10 civilians, including seven children, the New York Times and several US news outlets reported on Monday.

An internal Pentagon review concluded last month that the August 29 bombing in the Afghan capital did not violate the laws of war and was not caused by misconduct or criminal negligence.

The New York Times first reported on Austin’s decision, citing an unidentified senior Pentagon official who said the defence secretary had approved a recommendation from two US military commanders not to discipline any personnel involved in the attack.

Asked about the investigation during a news briefing on Monday afternoon, Pentagon spokesman John Kirby did not directly confirm the media outlets’ reports.

Kirby said last month’s review left it to US commanders to reprimand military officials over the drone attack if necessary, and that Austin had asked two top generals for recommendations on how to proceed after the bombing.

The generals submitted their recommendations, which did not deal “with issues of accountability”, and Austin approved them, Kirby said, without elaborating further.

“I do not anticipate there being issues of personal accountability to be had with respect to the August 29 air strike,” the spokesman told reporters.

The Biden administration acknowledged in September that the drone attack killed civilians.

The military initially defended the bombing as a “righteous strike”, insisting that it hit operatives from a group affiliated with ISIL (ISIS) who were planning an imminent attack on Kabul’s airport, where US troops were conducting a large evacuation operation.

Austin personally apologised for the bombing and promised a “thorough review” of the incident.

But on November 3, US Air Force Inspector General Sami Said said the bombing was an “honest mistake” caused by a series of execution errors, including communication breakdowns. “But it’s not criminal conduct, random conduct, negligence,” Said said at that time.

That conclusion was widely criticised by rights groups, including the American Civil Liberties Union, which said the findings failed to provide the victims’ families with “meaningful transparency and accountability for the wrongful killing of their loved ones”.

Family members of the August 29 drone raid victims told Al Jazeera after the attack that the 10 people killed ranged in age from two to 40 years old. “They were innocent, helpless children,” Aimal Ahmadi, whose nieces and nephews were killed in the attack, told Al Jazeera at the time.

One of the victims was Aimal’s brother, Zemari Ahmadi, who was driving the vehicle that was bombed. Zemari worked for US-based aid agency Nutrition and Education International (NEI).