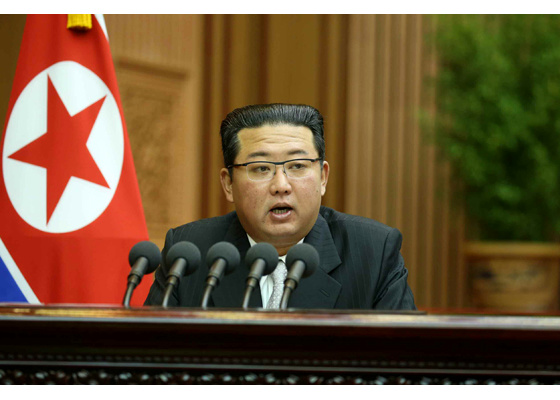 Kim Jong Un, President of the State Affairs of the DPRK, delivers a policy speech at the Fifth Session of the 14th DPRK Supreme People’s Assembly.

In late September Kim Jong Un, President of the State Affairs, delivered a policy speech at the Fifth Session of the 14th DPRK Supreme People’s Assembly. The international community pays special attention to the part dealing with the country’s political attitude towards the US.

-Analysis of the Changes in the Prevailing International Situation

Saying that now there exist not a few serious crises and challenges facing the world but the fundamental danger comes from the US and its vassal forces’ high-handed and arbitrary practices that destroy the foundation of international peace and stability,    Kim Jong Un analyzed that the current international situation is mainly characterized by the fact that it has got more complicated as the structure of the international relations has been reduced to the structure of "new Cold War" due to the US’s unilateral and prejudiced bloc-forming style of external policy.

This can be called a scientific analysis that gives a glimpse of the cause of the complicated issues existing in the international arena.

He analyzed that the US and its vassal forces’ high-handed and arbitrary practices are the main factor that destroys the foundation of international peace and stability. That his analysis is correct can be proved by the fact that about 70 countries are under sanctions by the US, the world has continued to suffer from wars and disputes even after the end of the Cold War and all these have been perpetrated or instigated by the US and its vassal forces.

What gives rise to more serious concern is the US’s unilateral and prejudiced bloc-forming style of external policy. It is because of this policy that the world faces an era of new arms race, an era of “new Cold War.”

On the basis of the analysis, Kim Jong Un clarified the DPRK government’s political attitude towards the US.

The DPRK has consistently demanded that the US withdraw its dual standard and hostile policy to it.

With regard to the DPRK issue, the new US administration has advocated "diplomatic engagement" and "dialogue without preconditions."

The point is whether it is their sincere attitude.

Quite recently, DPRK-targeted war games have been staged around the Korean peninsula. If the US really intended to solve the problems through dialogues with the DPRK, it would have refrained from military actions threatening the latter.

This clearly shows that the current US administration’s advocacy of "diplomatic engagement" and "dialogue without preconditions" is nothing but a trick for deceiving the international community and hiding their hostile behaviours and that the US has never abandoned dual standard and hostile policy towards the DPRK.

Proceeding from this, Kim Jong Un set the country’s sector of external work the task of concentrating on providing tactical measures for thoroughly implementing the strategic policy of the DPRK government towards the US on the basis of strictly studying and analyzing the present US administration’s stand on the DPRK, the prospects of the US political situation and ever-changing international balance of forces within the framework of their correlations.

However, the details of the strategic policy of the DPRK government towards the US were not mentioned in the media footage of his policy speech.

This will be another “homework” or anguish for the current US administration which watches the response of the DPRK towards it.

What should be remembered is that in his report to the Eighth Congress of the ruling Workers’ Party of Korea held early this year Kim Jong Un pointed out that the DPRK’s external political activities would be oriented with the main emphasis on prevailing over and containing the US, the fundamental obstacle to the development of the Korean revolution and the country’s principal enemy, that the key to creating a new DPRK-US relationship lay in the US withdrawing its hostile policy towards the DPRK, and that the DPRK would, in the future, too, approach the US on the principle of power for power and goodwill for goodwill.

-Inter-Korean Relations: Challenges and Their Solutions

In his policy speech at the session, Kim Jong Un, President of the State Affairs, outlined and assessed the current inter-Korean relations and the situation of the Korean peninsula, before clarifying the policy towards the south Korea at the present stage.

First of all, he mentioned the dishonest behaviour of the south Korean authorities.

Noting that south Korea was conspicuously conducting various military drills and arms build-up under the pretext of "containing" the DPRK and occasionally offending and provoking it in words and in deeds, he scathingly criticized the south Korean authorities for being bent on begging external support and cooperation while clamouring for international cooperation, toeing the line of the US.

In fact, the south Korean army waged various joint military exercises with the US troops, worsening the instability of the situation. In August alone, "exercise of the staff for crisis control" and a "combined command post exercise" took place from 10 to 13 and 16 to 26, respectively. Regardless of their scope and form, they both were aggressive in nature in that they were a rehearsal and preliminary for a nuclear war aimed at perfecting the operation plan, whose key point was a preemptive strike against the DPRK.

He said that as long as the factors, the sparks of distrust and confrontation between the north and the south, remained intact, hostile acts would be continued even though the termination of war was declared and, therefore, various unexpected clashes be repeated.

He continued: It is the invariable demand repeatedly explained by us to ensure the respect for each other and withdraw the partial view, unfair and double-dealing attitude and hostile viewpoint and policies towards the other side before declaring the termination of war, and this is an important task to be settled beforehand in order to control the inter-Korean relations and open up a bright future.

He stressed: It is important for the south Korean authorities to change its confrontational and habitual attitude towards our Republic, keep the stand of national independence through practices, not in words, deal with the inter-Korean relations with a view to settling the essential issues and give weight to and sincerely implement the north-south declarations.

Saying that he obviously reminded the south Korean authorities once again of the fact that it depended on the attitude of the south Korean authorities whether the inter-Korean relations would be restored and develop onto a new stage or continue to keep the present state of worsening, he added that the DPRK did not have any aim nor reason to provoke south Korea nor any idea to harm it and it was necessary for south Korea to promptly get rid of the delusion, consciousness of crisis and awareness of getting harmed that it should deter the north’s provocation.

In his speech, he advanced magnanimous measures for improving the north-south relations.

To look back, the south recklessly committed a childish act of scattering leaflets to the north last year, thus triggering strong anger of the north, with the result that the communication lines between the two were cut off.

Thereafter, the south did not stop scattering leaflets to the north, under the pretext of the freedom of individuals, and its government did not take active measures to promote its relations with the north but only clamoured about such inessential issues as civilian-level cooperation and humanitarian aid.

This clouded the bright future of the inter-Korean relations.

However, Kim Jong Un, as part of an effort to realize the expectations and desire of the entire Korean nation to see the north-south relations recover from the present deadlock as early as possible and durable peace settle in the Korean peninsula, took the broad-minded measure of restoring the north-south communication lines from early October.

His speech clearly explained the cause of deadlock in the inter-Korean relations and presented a just and fair proposal to break it. Also, it highlighted the nation-first ideal, the ideal of national independence, that the issues between the north and south should be solved by the Korean nation itself.

The south Korean authorities must approach the DPRK’s just and fair proposal in good faith and respond to it with sincere attitude.