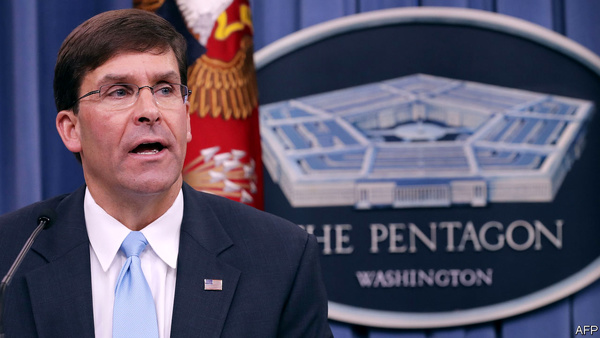 According to Reuters, Esper, whose first full day in the Pentagon was on Monday, led the Army until the surprise resignation of Patrick Shanahan as acting defense secretary last week. Esper is now the third person in six months to work at the defense secretary’s desk.

His first week coincides with a previously scheduled NATO defense ministerial meeting, where the focus will be on other pre-planned discussions - including an approaching end to the 1987 Intermediate-range Nuclear Forces (INF) Treaty between the United States and Russia.

But Kathryn Wheelbarger, an acting assistant defense secretary, said Pentagon officials would raise Iran during one of the NATO sessions on Wednesday or Thursday.

“We are prepared to provide an update to the (NATO) alliance,” Wheelbarger said, briefing reporters ahead of the trip.

“It’s very important to the (Defense) Department and the U.S. government as a whole that we make sure our allies are as cognizant, and that we are as transparent on this issue, as possible.”

Trump, who withdrew from a 2015 nuclear deal with Iran despite objections from European allies, wants to force Tehran to open talks on its nuclear and missile programs and its activities in the Middle East.

Iran has so far refused and instead warned it is ready to enrich uranium to a higher level if Europe cannot shield Tehran from U.S. sanctions. Iran denies U.S. accusations that it has also repeatedly carried out attacks on oil tankers in recent weeks.

France, Britain and Germany have sent an official diplomatic warning to Iran about the serious consequences Tehran faces if it scales back its compliance with the 2015 nuclear deal, two European diplomats said on Monday.