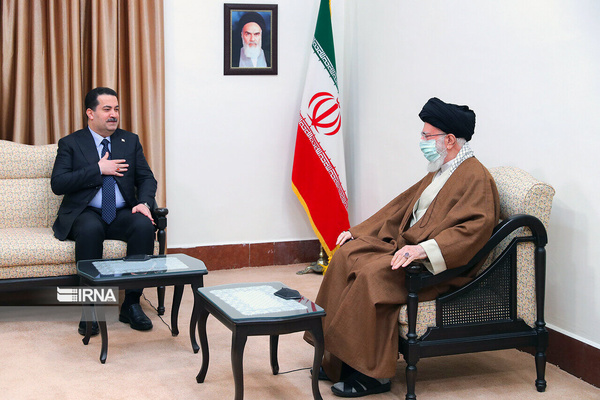 Describing the progress of Iraq in line with the interests of the Islamic Republic of Iran, Ayatollah Khamenei added, “We believe you are the person to sort out Iraq’s affairs and relations to elevate the country to an independent position that is in line with its civilization and history."

Congratulating Mohammed Shia' Al Sudani on his election as Prime Minister of Iraq, the Supreme Leader called him a devout and capable person heading the Iraqi government.

Describing Iraq as the best Arab country in the region in terms of natural and human assets as well as cultural, historical, and civilizational backgrounds, Ayatollah Khamenei stated that unfortunately, despite such a background, Iraq has not yet been able to be in its high and real position and it is hoped that with “your presence”, Iraq would achieve its real progress and status.

Citing integrity and unity of the parties inside Iraq as one of the necessities of getting Iraq to its real position, Ayatollah Khamenei highlighted that another requirement of this progress is the maximum use of young and motivated Iraqi forces.

The progress of Iraq has enemies who may not express hostility, but they do not accept the current government, Ayatollah Khamenei said, adding that Iraq should stand firm against the will of the enemy by relying on the motivated, young people and forces who passed their test against the great and fatal danger of ISIS (Daesh).

Describing Iraq’s progress in the fields of economics, service, and even cyberspace as well as presenting a good face of the government to the Iraqi people as subject to using the enormous capacity of Iraqi youth as a real army of government support, Ayatollah Khamenei underscored that the new Iraqi government can use such potentials besides the good financial resources and facilities existing in this country, in various areas, to make serious development.

Referring to Iraq’s Prime Minister's remarks that said under the country's constitution, Iraq will not allow any parties to use the Iraqi territory to disrupt Iran's security, Ayatollah Khamenei regretted that this is being violated in some areas of Iraq now, and the only solution is for the Central Government of Iraq to extend its authority to those areas as well.

Ayatollah Khamenei went on to say that Iran’s view on Iraq’s security is that if any side intends to disrupt Iraq's security, Iran will stand up firmly to safeguard Iraq’s security.

Terming the security of Iraq as the security of Iran and vice versa, Ayatollah Khamenei referred to the Iraqi prime minister's talks in Tehran today, saying that in previous periods, good negotiations and understandings were conducted, but little was done, so all agreeements, especially in the fields of economic cooperation plus exchange of goods and rail communications, should be put into practice.

Pointing to some wills that try to block agreements and cooperation between Iran and Iraq, the Supreme Leader noted that these wills must be overcome by action and measures.

Mohammed Shia' Al Sudani, for his part, pointed to the strategic and historical ties between the two countries and added that the obvious example of Iran and Iraq's closeness was the war against ISIS.

The Iraqi Prime Minister commemorated the martyrs General Qassem Soleimani and Abu Mahdi al-Mohandes and described the two honorable martyrs as another example of the intemacy of the two nations.

Referring to the new Iraqi government's determination to implement agreements between the two countries and expand relations in various fields, especially in the economic ones, he highlighted that the security of Iran and Iraq is not separate, and under the Constitution, Iraq will not allow any party to use the Iraqi territory to undermine security.