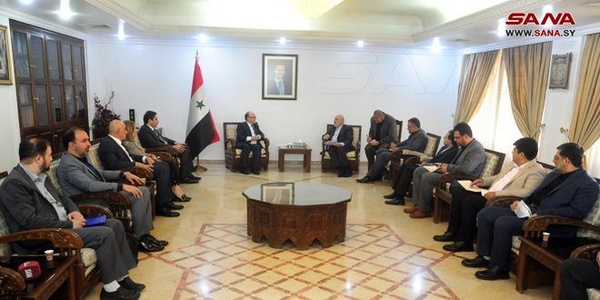 Ibrahim made the remarks in a meeting with the president of Malek Ashtar University of Technology, Ghasem Taghizadeh, and his companions in Damascus on Monday night.

The Syrian minister underlined that his country is keen on increasing cooperation in scholarship, holding scientific seminars, and exchanging experiences.

According to the Syrian official, the usage of scientific and technological experiences of Iranian research centers such as the Male Ashtar University of Technology is of great importance in terms of conveying technologies and sciences to universities in Syria.

The minister also called for implementation of signed memoranda of understanding between the two sides, emphasizing the expansion of cooperation with the aim of securing bilateral interests.

Taghizadeh, for his part, referred to amicable ties between Syria and Iran as well as mutual programs for enhancement of scientific, cultural, and research collaborations, underscoring that Tehran is ready to enhance cooperation in this respect.

The Iranian academic figure further pointed out the Islamic Republic’s achievements and progress in artificial intelligence, nanotechnology, environment, medical and chemical industries, as well as satellite and military technologies.