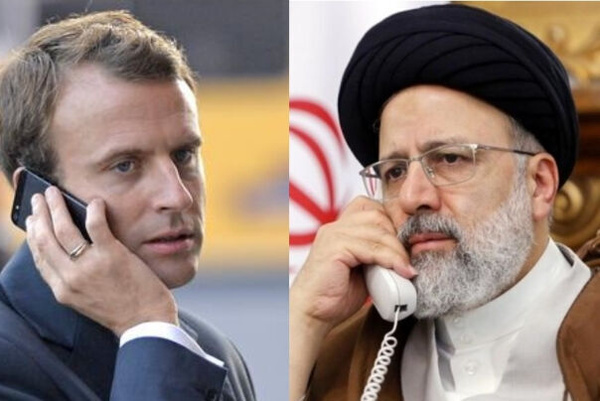 President Ebrahim Raisi said on Sunday in a phone talk with his French counterpart Emmaneul Macron that Iranian government welcomes expansion of ties with France, especially in economic and trade fields.

President Raisi made the comment in response to President Macron’s proposal for reviewing bilateral ties and beginning a new chapter of ties based on broad cooperation between Tehran and Paris.

He said that undoubtedly, the political independence of Iran and France is a precious capital for establishment of balanced, strong and sustainable bilateral ties to secure the two countries shared interests and block the path for the interference of outsider factors.

In response to the French president’s comments on Conference of Iraq’s Neighbors in Baghdad, President Raisi said that Iran has always and in different periods stood by the side of the Iraqi nation.

The policy of the Islamic Republic of Iran has always been supporting the Iraqi nation to establish peace and stability in the region, and boosting regional cooperation aimed at achieving that goal, which we believe is very appropriate, he added.

On regional and world nations’ campaign against terrorism, Raisi said that the ISIS was established by the Americans and is still supported by them, adding that the Americans need to answer the world public opinion on their support for the ISIS and new versions on terrorism.

He condemned some countries’ approach on categorizing terrorism into good and bad terrorists, emphasizing that the Islamic Republic of Iran condemns all types of terrorism, not discriminating among the Damascus ISIS, the Iraqi ISIS, or the Khorasan ISIS.

About the situation in Afghanistan, President Raisi said that the Americans made a big mistake in Afghanistan, as 20 years of their occupation of that country bore no tangible result for the Afghans.

Under the current conditions everyone’s efforts must be aimed at the establishment of an all-encompassing government in Afghanistan and letting the Afghan people decide their own fate themselves, he said.

Raisi said that the military interference of NATO and America in Afghanistan is defeated, and we need to provide for conditions in which the Afghan groups will achieve an acceptable model for the entire Afghan nation, and the Islamic Republic of Iran is ready for establishment of peace and security in Afghanistan and blocking the path for fratricide there.

He also announced the Islamic Republic of Iran’s support for establishment of a strong government in Lebanon that will be capable of ensuring that nation and country’s rights.

Iran will not hesitate in offering any type of humanitarian aid to the Lebanese people and we are ready for cooperating with France for Lebanon’s advancement and development, added the Iranian president.

Raisi said that the Lebanese people are now suffering from economic sanctions and France can play a role in termination of those sanctions.

Iran, France and Hezbollah can spend efforts and contribute to the establishment of a strong government is Lebanon that will be to the benefit of that nation, he said.

The French president, too, emphasized in the phone talk that he favors development and deepening of ties with Iran after reviewing them and opening a new chapter in bilateral ties.

We need to begin a new move with new axes in bilateral ties in various political, economic, and regional cooperation fields, said Macron.

On developments in Afghanistan, President Macron said he believes the future government of Afghanistan needs to be the results of the national will of that country’s people and the Taliban must respect such issues as the human rights and international commitments.

Referring to the presence of Afghan refugees in Iran and the resulting difficulties, he said that the UNHCR’s cooperation and assistance with Iran is needed in that respect.

The French president referring to the political status in Lebanon said that France, Iran and Hezbollah can cooperate in establishment of a strong and competent government in that country.

President Macron meanwhile expressed hope that the Vienna nuclear talks will be soon resumed with the presence of Iran’s representatives.