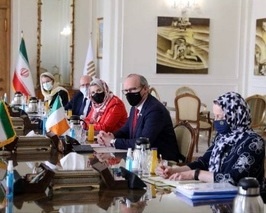 Speaking in an exclusive interview with IRNA, Coveney commented on the fact that over the last few years the US not only did not implement the UNSCR 2231 but also created roadblocks for other countries in this regard.

He said: “I think there is a lot of skepticism and there is a lack of trust in terms of future of the JCPOA and that's why I am here to reassure people that the European Union and the E3 in my view the US also is very committed making this agreement work in the future and I think we need to focus on the future and of course on the past.”

“If we focus too much on the past we will continue to struggle to build trust for a future agreement so I think a lot has changed recently,” he added.

“We have seen a change of policy in the United States, which is very fundamental, towards the JCPOA and working to protect that agreement in the future and of course we have had strong signals from Iran also that if there are moves in that direction, we will respond positively,” he noted.

Referring to the damages caused by the US unilateral withdrawal from the Iran deal, he said: “The challenge now, I think, for senior politicians and decisions makers in the key countries involved is to find a way of building sufficient trust that can allow the negotiation to proceed and to allow the JCPOA to be rebuilt because of the damages that have been done in recent years.”

“That won't be easy but in my view, it is an opportunity that we should not lose  and I think many countries Iran included will regret it if they don’t.”

“I certainly think that there is a window of opportunity now that all of us who are committed to the JCPOA and the nuclear agreement needs to take,” Coveney reiterated.

“There will always be some who will oppose this in key positions but in my view, this is an opportunity that potentially could ease tensions in the region and globally.”

“And those of us who believe in peace and multilateral structure and peace negotiations believe that the JCPOA can play a vital role in this region and in the context of disarmament and nuclear non-proliferation,” the senior Irish diplomat said.

“Ireland, my country, has a very strong and long record in advocating disarmament and that is why we have taken a direct role and interest in this issue and volunteered Ireland as a facilitator on the Security Council on this issue and that is why I am here for the first time in nearly 20 years an Irish foreign minister is visiting Tehran and I promise you we won't be waiting for 20 years again and I hope to be a visitor here much more often than that,” he noted.

Elaborating on the achievements of his recent talks in Tehran, Coveney said: “The bilateral relationships between the Islamic Republic of Iran and Ireland is going to take a jump forward in the months and years ahead.”

“We are committed to reopening the Irish embassy in Tehran in the next few years and in the short term we are going to have a charge de affairs who will be in the German embassy but to work with our consular who is based here in Tehran and to prepare for setting up our Irish embassy here,” he added.

“The Irish diplomatic footprint is going to be stronger and permanent in the future,” he said, adding: “The main focus of my visit today and we had the privilege of meeting president Rouhani and Foreign minister Zarif was to focus on the JCPOA and we are on the security council for the next two years and we have a specific role as a facilitator for resolution 2231 which is the resolution which is the basis for the JCPOA from 2015.”

“I think most people in Iran know what has happened since then and the last few years have been difficult but I believe there is an opportunity now with the new administration taking office in the US and also with an opportunity for Iran to move back in compliance with the JCPOA in a way that the deal was originally intended.”

“There is an opportunity to improve our relations with other parts of the world and to ensure that what was a historic agreement in 2015 from an Iranian perspective to a global perspective can be put into practice in full again that what happened by itself,” he said.

“It involves governments that are willing to take risks to start to build trust and that won't be easy by my meetings with president Rouhani was primarily about this issue to understand the Iranian concerns but also ambitions in the context of the JCPOA in the future and of course we have followed that up nearly three hours of discussions with foreign minister Zarif, of course, we spoke about many other things as well from Yemen to Syria, to Lebanon, to Afghanistan, to Israeli-Palestinian conflict.”

“We touched on a lot of regional issues but we spent about half of our time on discussing the JCPOA and why would to take forward back into full compliance by what we regard as a historic and important agreement from 2015 that unfortunately since 2018 has been very damaged so this is a historic opportunity in my view for Iran to take  and we hope that the other countries that are involved in the JCPOA would encourage a move in the right direction, of course, we hope that the new US administration will also have given a signal and that the direction that we want to move in.”

In response to a question regarding Iranians’ expectation of a U-turn in US foreign policy after President Biden took office and also revising US maximum pressure policy, and that the US is trying to take advantage of Trump’s sanctions as a tool to pressure Iranian people and a more difficult stance taken by Europe with regard to JCPOA as well, he said: “I think we have seen in a relatively short time and the new US president and administration changed policy, give a very clear signal that they are interested in re-engaging positively in the context of the JCPOA.”

“They along with EU partners have invited Iran to come and talk about how that might work. They have taken some actions also I terms of removing some travel restrictions from Iranian diplomats and so there have been very clear signals coming from Washington that they want to engage positively,” he added.

“I can understand the skepticism and cautions coming from Iran because of recent years but let me assure you the European Union wants to see the JCPOA protected, the E3 wants to see the JCPOA protected and reenacted if you like and I believe that the US wants that too and what is required now is engagement with all of the key players who are responsible for the JCPOA in the first place P5+1 structure and we all need to work to ensure that we can provide reassurance to Iran and to others that engagement is what we have trust in so that we can move this process in the new political environment that is now available.”

“We can move forward in a progressive way that protects the JCPOA and to put its benefits in place, Coveney noted.

For much of the interview, the Irish foreign minister please elaborated on bilateral relations between Iran and Ireland and also its prospect, saying: “I hope we can have a positive future. Ireland is an outworld-looking country we like to listen to as well as talk and I am here to listen primarily to your president, foreign minister to hear the concerns that Iran has in the context of the JCPOA so that we can try to work to facilitate moving forward.”

“Ireland is a country that is well-traveled we have less than 5 million people living in the Republic of Ireland but we have about 70 million people of Irish to send across the world so we are a global nation in many ways and we take interest in global affairs and Iran is a very significant country in this region,” he added.

“We want to understand this and we want to work with Iran in a constructive way when possible and I hope we can to that in relation to Yemen, JCPOA, humanitarian access to Syria, to take decisions in Afghanistan, supporting elections in Palestine while we disagree to some foreign policy issues.” “There are certain things we can work on together and we try to focus on the positive things as we can so this is a fascinating country, with an incredible history and I hope we can look to the future with more optimism,” he stressed.

“Last week, the Irish government formally made the decision to reopen our embassy in Tehran. In 2012 Ireland closed a number of its embassies in the world we had a very difficult economic recession and we had to make some difficult choices for financial reasons. We are now in a stronger position and the combination of Ireland being on the Security Council and therefore relevant to the foreign policy to this part of the world but also our willingness to expand our global diplomatic footprint has meant that we want to have a presence in this region and in this country.”

“I think a very strong signal of intent coming from Ireland is to reestablish its diplomatic footprint in very clear terms and we can have an honest and blunt relationship when we agree or disagree and look at economic opportunities that may come from that relationship also in the future,” Coveney said.

“We can both have the benefits of a successful peace process in Yemen, I hope we can work together to ensure that humanitarian access can get into a part of Syria that needs us,” he added.

“I hope that we can ensure that there are successful elections across Palestinian territories and I hope we can together work to ensure that there is a stable Lebanon in the future. Ireland has many peace-keeping soldiers in southern Lebanon in United Nations Interim Force in Lebanon since the 1970s.”

Expressing his optimism regarding the revival of the JCPOA in the future, Coveney said: “I hope that if we can get the JCPOA back in place, well then many of the challenges that we have seen in recent years will no longer pose a significant barrier to trade and investment.”

“I know that this is a frustrating period since 2018 but I think if we take this opportunity that is now available then I think Iran can benefit economically, significantly and then the rest of the world can also benefit from the reassurance that the JCPOA can give in terms of full and transparent nuclear inspections and so on.”