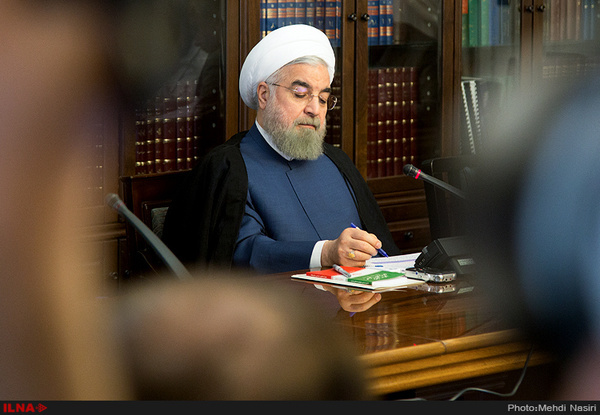 President Hassan Rouhani said on Wednesday that delay is not good even for one hour for lifting sanctions, adding that the people have the right to get rid of sanctions and the burden they shoulder under sanctions.

In a cabinet meeting on Wednesday, Rouhani said that the rights of the people are being violated by sanctions when a bullying power does not allow Iran to get back money from export of goods.

President Rouhani recalled guidelines of the Supreme Leader to focus on domestic economy and the Resistance Economy to avert hardship imposed on people by the sanctions, saying that the sanctions violate basic human rights of the people and life under sanctions and isolation is harmful.

The US rhetoric has changed and they have admitted wrong decisions by the previous US administration and even canceled a letter to the UN demanding snapback to the sanctions lifted by the UN Security Council Resolution 2231, the President said, adding that Washington, however, has taken no serious step to lift the unilateral sanctions and recognizing Iranian nation’s rights.

Rouhani underscored that if the seven states parties to the JCPOA have a resolve for compliance to the JCPOA, especially Iran and the US, it would be a matter of a few days for the US to lift sanctions and for Iran to return to full compliance with the deal.

President Rouhani said that former US President Donald Trump failed totally in his Iran policy without even a single win and that was a trap laid by Israel.

‘Does the current US administration admit that the measures by their predecessor were wrong? If yes, then they should both admit evidently and fulfill their commitments and even compensate the mistakes,’ Rouhani added.

He underlined that this is exactly what Iranian officials say when talking to Europeans who insist on revival of the JCPOA.

Describing the JCPOA as one of the most important political deals in Iran’s history, Rouhani said that the deal legitimized Iran’s peaceful use of nuclear energy that was previously a source of pressure on the country.

Referring to the countries remained in the JCPOA as 4+1, the President emphasized that they have to admit that Iran stood up to the Economic War for three years and it was Iran that saved the deal. Therefore, he added, they have to abide by the law.

Meanwhile, he asked Iran’s Expediency Discernment Council to pass the law approving FATF bills, elaborating that the FATF-related discussions have nothing to do with sanctions.