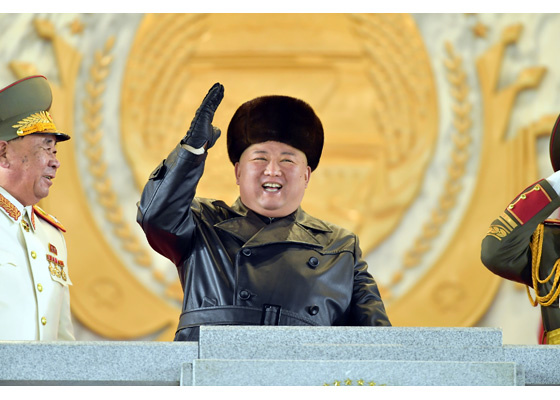 Supreme Leader Kim Jong Un was appointed as the supreme commander of the armed forces of the Democratic People’s Republic of Korea on December 30, 2011.

Supreme Leader Kim Jong Un was appointed as the supreme commander of the armed forces of the Democratic People’s Republic of Korea on December 30, 2011.

Over these years the DPRK’s armed forces have grown in strength; the Korean People’s Army is armed with world-class military equipment and all the armed forces of the country have been well prepared to defeat any foreign invasion. Military experts and analysts around the world agree on this point.

The major traits of a renowned general are wisdom, courage and benevolence.

Kim Jong Un is widely known for his outstanding strategy, wisdom and acumen.

The essential factor in winning victory is a commander’s wisdom, not military equipment or the number of soldiers.

Kim Jong Un is also noted for his unrivaled courage.

Though possessed of outstanding wisdom, a commander cannot be successful if he lacks courage.

Recently the hostile forces resorted to vicious schemes in trying to stifle this country both in military and economic aspects.

Despite the touch-and-go situation, Kim Jong Un saw an artistic performance with the people and arranged a national conference of pilots in the capital city of Pyongyang. Also, he visited light-industry factories with a view to improving the people’s standard of living. At Panmunjom on the Military Demarcation Line, he had a photo taken with all the soldiers including sentries.

Kim Jong Un is respected as a leader who loves his people and leads the army by dint of ennobling virtue.

Soldiers act according to orders and they are obliged to keep military discipline. But they are human beings after all.

Kim Jong Un regards soldiers as his comrades sharing will and destiny with him. He visits army units even in remote mountains or on far-flung islands, taking necessary measures for improving the living conditions of the soldiers with parental affection. He mingles with them unreservedly, sometimes having a photo taken with each one of them.

There are many moving stories about his affection; when some sailors fell during the performance of combat duty, he took all necessary steps to add luster to their exploits; and hearing of a pilot’s death, he wrote a letter to his wife to console her.

It is quite natural that all the officers and men of the army respect their Supreme Commander sincerely and are full of determination to dedicate their lives for his sake.

There will be no match for this army that has formed an integral whole based on affection and obligation.

The world media and the international society speak highly of the DPRK leader, calling him “young leader possessed of outstanding wisdom and adroit tactics,” “statesman and commander with foresight and courage,” and “benevolent General.”