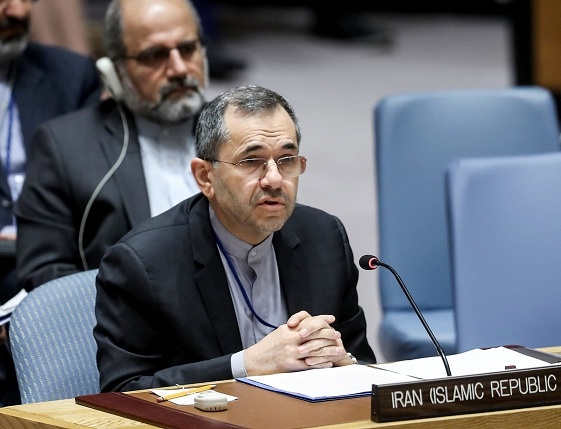 Iran has no plans to hold talks with the Biden administration and is waiting for the new U.S. president to take the first step to lift sanctions and return the U.S. to the 2015 multinational nuclear agreement, Tehran's U.N. ambassador told NBC News on Monday.

In his first interview since President Joe Biden was sworn in last week, Amb. Majid Takht Ravanchi told NBC's Chief Foreign Correspondent Richard Engel that Iran has not spoken to the new administration yet.

"No, there has not been any conversation between Iran and the U.S. after Biden came into office," Ravanchi said.

Asked if there were plans to open up a direct dialogue with Washington or indirect communication through an intermediary, perhaps via the Swiss government, Ravanchi said, "We are not planning to initiate anything."

Echoing similar statements from Iran's foreign minister, Mohammad Javad Zarif, the Iranian diplomat said Tehran was not prepared to offer goodwill gestures or confidence-building steps until the U.S. returned to the nuclear agreement it left in 2018.

In the meantime, Iran was in no rush, Ravanchi said. "It's up to the U.S. to decide what course of action to take. We're not in a hurry," he added.

Iran's economy has dramatically contracted under the weight of U.S. sanctions which were reimposed after ex-President Donald Trump withdrew the United States in 2018 from an international nuclear agreement between Iran and world powers.

The deal, known as the Joint Comprehensive Plan of Action or JCPOA, introduced strict limits on Iran's nuclear program in return for easing economic sanctions.

As a candidate, Biden said he would have the United States return to the agreement if Iran met its obligations under the deal.

Citing Biden's statements, Ravanchi said Iran wanted to see the new president make good on his promises and if he did, Tehran would be ready to once again abide by the terms of the accord.

"The ball is in the U.S. court," Ravanchi said.

"It is totally up to the new administration. So as soon as they implement their obligations, Iran has said on numerous occasions that Iran will return to the full implementation of its undertakings."

Despite Iran's contention that the first move is up to Washington, members of Biden's national security team have suggested the new administration was not on the verge of a quick decision to rejoin the nuclear deal.