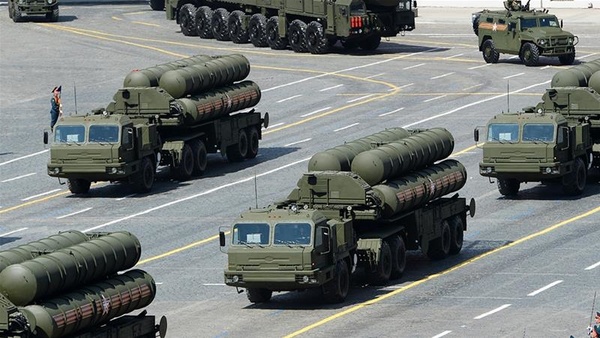 The ministry said in a statement on Friday that "the first group of equipment" of the advanced air defence systems was delivered to the Murted airbase outside the capital, Ankara.

"The delivery of parts belonging to the system will continue in the coming days," Turkey's defence industry directorate said separately.

"Once the system is completely ready, it will begin to be used in a way determined by the relevant authorities."

Al Jazeera's Sinem Koseoglu, reporting from Istanbul, said: "As far as we have been told, the systems will be operational by October 2019."

She added that the delivery crossed a red line set by the US.

"This is the point where the spat between Turkey and the US intensifies, because Washington says even the S-400 arriving to Turkey is a matter of US sanctions," she said.

The US has strongly urged Turkey to pull back from the deal - the first such move between a NATO member and Russia  - warning Ankara that it will face economic sanctions under the Countering America's Adversaries Through Sanctions Act if it goes ahead with the purchase, reportedly costing more than $2bn

Washington has also said Turkey will not be allowed to participate in the programme to produce hi-tech F-35 fighter jets.

The US has repeatedly said that the Russian system is incompatible with NATO systems and is a threat to the F-35.

Sanctions would mark a new low in the already-tense relations between Turkey and the US. Last year, the US imposed sanctions on Turkey over its detention of an American pastor, triggering a Turkish currency crisis. The sanctions were later lifted upon the pastor's release.

The deal with Russia has also raised concerns in Western circles that Turkey is drifting closer to Moscow's sphere of influence.

Ankara has refused to bow to US pressure, insisting that choosing which defence equipment to purchase is a matter of national sovereignty.