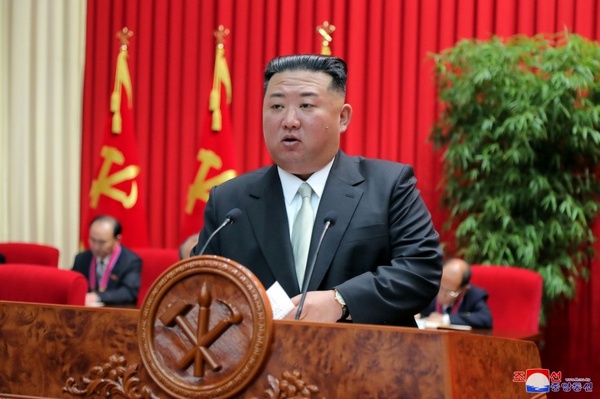 Ryonpho Greenhouse Farm – another gift of love given to our people by the motherly Party for the 77th anniversary of the founding of the Workers’ Party of Korea on October 10, 2022.

In February last year, respected Comrade Kim Jong Un formulated a plan for building a greenhouse farm even at the cost of sacrificing a major military base, in order to maintain smooth production and supply of lush green vegetables for the people of Hamhung City and South Hamgyong Province who are playing a great role in the development of the economy and science and technology.

Respected Comrade Kim Jong Un energetically guided the construction project so that the construction be completed at the best level.  He selected the building site for the farm amid the gritty wind. At the ground-breaking ceremony, he delivered a stirring speech inspiring the service personnel to the great construction and took up the first spade to signal the start of the construction.

It was the unwavering determination and will of our Party that it should never fail at any cost in delivering the promise made to the people and the work for the people’s welfare. Accordingly, the Ryonpho Greenhouse Farm was completed in a short time span of just 230 days and given as a gift to our people.

The greenhouse farm covers a production area of 100 jongbo with a production capacity of millions of tons. It is an up-to-date large-scale greenhouse farm that has put production process on a modern, scientific and commercial basis. The Ryonpho Greenhouse Farm, which has wonderfully emerged as the base of rural civilization of our own style, was not built because there was excess money and materials to spare or because the conditions and circumstances were favourable.

It is the brilliant crystallisation of love of people created by the energetic leadership of the Workers’ Party of Korea which makes every possible effort to take care of people more warmly and to best serve them even in the face of the worst national crisis in the true sense of the word, caused by the vicious stifling attempts of the hostile forces against the DPRK, a series of harsh natural disasters and unexpected malignant pandemic crisis.

Ryonpho Greenhouse is a great farming area which demonstrates the civilization of a new era: 850-odd hydroponic and soil hothouses which are modernized, intensified and industrialized, more than 1,000 dwelling houses of local characteristics, schools, cultural centres and leisure complexes are brought into perfect harmony by blocks, covering a wide area of 280 jongbo.

It is also the wealth of prosperity which perfectly embodies the political ideal of people-first principle and the Juche-based idea on architectural beauty, and a new revolutionary entity of socialist rural improvement.

When sounds of firing, screaming and moaning are getting higher in every part of the world due to the conflicts, civil wars, hunger and diseases, sounds of people’s joy, laughter and fireworks which herald fresh miracles and changes brought about day by day are reverberating through our country as an echo of victory in socialism.

Ryonpho Greenhouse – the world’s largest farm of hothouse vegetables – is the demonstration of the single-hearted unity firmly rallied around our Party, and also a dramatic event which fully displayed the might of the Juche-oriented, powerful and independent national economy.

Indeed, the miracle of Ryonpho, which was achieved by overcoming unprecedented difficulties, made our country stronger once again.

-No Satisfaction in Work for People’s Welfare

November 9, 2012 is the day when the Ryugyong Health Complex was inaugurated. It is a public service facility established with all its splendor of modern architecture on the riverside of picturesque Taedong River.

Ryugyong Health Complex is a structure built within such a short span of time – 9 months - by our soldier builders who put their heart and soul into its construction down to the simple tiling, following the instructions of respected Comrade Kim Jong Un to build a Changgwang-Health-Complex-style comprehensive service facility for the people in the east Pyongyang area at the behest left by General Kim Jong Il.

Ryugyong Health Complex is a comprehensive service facility for people’s hygiene and welfare, a four-storey building inclusive of the subterranean storey with the accommodation capacity of 7,200 people per day – 1.2 times higher than that of Changgwang Health Complex. It is equipped with bathhouses, family baths, private baths, therapeutic exercise rooms, barbers’, beauty salons, recreation facilities, restaurants, refreshment counters and an underground garage. Completion of such a mega-facility within such a short span of time of less than a year is creditable to the tireless efforts made by respected Comrade Kim Jong Un.

Respected Comrade Kim Jong Un, despite his busy schedule looking after the state affairs, visited the construction site of the health complex three times, appreciated the labour of the soldier builders and told them of what they hadn’t thought of in the building of the health complex, and thus inspired them to provide our people with civilized and well-off material and cultural life, true to the behest left by General Kim Jong Il.

When he visited the construction site for the first time in May 2012, he gave detailed instructions to the relevant officials: Should the brim of a bathtub cut into the shape of a rectangle, there is a probability that people might get hurt and therefore, the bathtub should be designed otherwise; considering the considerable humidity within the facility, the railings should be made either of stone or stainless steel rather than wood; saunas should be illuminated with luminescent devices that emit cold light so as to retain an aura proper to sauna; head chairs should be arranged with their backs against the windows in the barbers’, not the other way around; in a nutshell, people’s convenience should be of primary consideration, rather than the completion of the facility itself.

He visited the construction site again in the midsummer heat of July and corrected the shortcomings of the construction process such as coloring, temperature, sanitation and visual aids. He said that the joins on the glass wall were too narrowly glued to prevent heat loss and as the chairs in the resting hall were covered by cloth, sanitation wouldn’t be ensured when it became sweaty.

While looking around the Ryugyong Health Complex in November, just before its completion, he saw the guideboards of the first and second floors which were framed by computer graphics and printed out to be laminated in plastic. He said that they did not fit the modern construction built for the people and gave valuable instructions to be meticulous down to details such as guideboards.

Thanks to the meticulous care and remarkable wisdom of respected Comrade Kim Jong Un, the Ryugyong Health Complex could be built as a genuine service facility for the people providing them with happy and civilized living.

So, all the people who receive wonderful service at the Ryugyong Health Complex are overwhelmed with gratitude towards Comrade Kim Jong Un who built the service facility for the people.

This year alone, the splendid Songhwa Street and terraced residential district in Kyongru-dong have been completed proudly displaying their modern architectural beauty, and Ryonpho Greenhouse Farm has been wonderfully built as befits the base of rural civilization of our own style.   These are results of the principle of prioritizing, respecting and loving people established by respected Comrade Kim Jong Un who feels no complete satisfaction with regard to the work for the people. All of them are world-class fine constructions of the times symbolizing our people’s happiness.

Forests are indispensable for the existence and development of humankind as well as for the protection of ecosystem of the planet.

Thus, many countries are paying great attention to the afforestation - the precious asset which has a great bearing on the existence of humankind and the development of the economy.

But, in recent years, huge forest resources in the world have been devastated due to various natural disasters caused by climate change and illegal logging. This is evoking great concern from the international community.

By contrast, in our country, under the energetic leadership of respected Comrade Kim Jong Un, modern tree nurseries have been built all across the country and vigorous struggle is being waged to turn the whole country into thick woodland. Thanks to these efforts, our country is getting greener year by year as befits the land of socialist country.

8 years ago, respected Comrade Kim Jong Un who visited the Central Tree Nursery under the Ministry of Land and Environment Protection took a look at a Pinus strobes with a broad smile on his face.

This tree has now grown tall with its deep root into the ground. Its green leaves add beauty to our beautiful homeland which is being tinged green day by day.

November 10, 2014, is an unforgettable day when Comrade Kim Jong Un visited the Central Tree Nursery under the Ministry of Land and Environment Protection. On this day, he recalled with deep emotion the day when he had accompanied the great Comrade Kim Jong Il who had visited this place in October 2011. He said that he could recall what the great General said in an anxious voice, while taking a look at bare mountains with a feeling of pain on his continuous field guidance trips. He also said that it is aching to think that he has yet to relieve his anxiety.

That day, respected Comrade Kim Jong Un said that the reforestation is the war against nature and there is nowhere for us to retreat. He also made an appeal to turn the whole country into thick woodland by arousing the whole Party, entire army and all the people to the reforestation campaign, thus realizing the patriotic desire of the great General without fail.

Then he also noted that we should launch a reforestation campaign to restore the cleared forest just as the whole Party, entire army and all the people did after the war. He also said that he would be the commander of the campaign.

The earnest appeal of the peerless great man burst into the flame of forest restoration campaign across the country. Thus, modern tree nurseries were built in every part of the country, regardless of mountainous area, flat area or urban area making it possible to produce and provide on a large scale the trees of good species, and measures were also taken to develop the forest science and technology by modernizing the Academy of Forest Science.

Indeed, under the warm care of respected Comrade Kim Jong Un, a peerless patriot who is cultivating all mountains in the country to be “golden mountains” and “treasure mountains”, our country will shine brighter and get greener as the land of beautiful scenery in the era of the Workers’ Party of Korea.