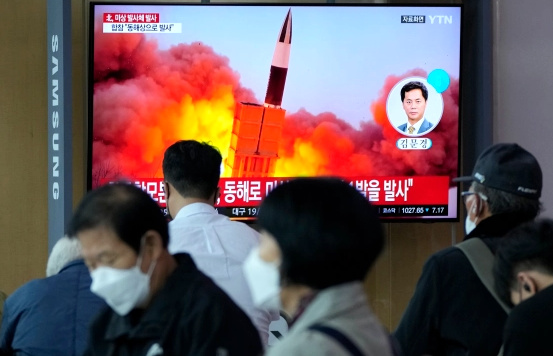 South Korea says weapon, which Japan described as a ballistic missile, was fired into the sea early on Tuesday morning.

North Korea has fired a suspected ballistic missile into the sea, officials in South Korea and Japan said, shortly before Pyongyang’s representative told the United Nations the country had the “righteous right” to test weapons because of the “hostile” policies directed against it.

In an emergency National Security Council meeting, the South Korean government expressed regret over what it called “a short-range missile launch at a time when political stability on the Korean Peninsula is very critical”.

Details of the launch were being analysed by South Korean and US authorities. But Japanese Prime Minister Yoshihide Suga said North Korea fired “what could be a ballistic missile” and that his government had stepped up its vigilance and surveillance.

It is the third launch this month after Pyongyang previously tested a “strategic” cruise missile and two railway-borne ballistic missiles. The North is banned from conducting ballistic missile tests under United Nations sanctions imposed over the nuclear-armed country’s weapons programme.

The US State Department condemned the launch and urged Pyongyang to engage in dialogue.

“This launch is in violation of multiple UN Security Council Resolutions and poses a threat to the DPRK’s neighbors and the international community,” it said in a statement. “We remain committed to a diplomatic approach to the DPRK and call on them to engage in dialogue.”

Kim told the UN that Pyongyang had a “righteous right to self-defence” to develop weapons.

“We are just building up our national defence in order to defend ourselves and reliably safeguard the security and peace of the country,” he said, noting the US had nearly 30,000 troops stationed in the South and that there had been no formal treaty to end the Korean War.

The North invaded the South in 1950 and fighting came to an end three years later with an armistice, leaving the two countries technically still in a state of conflict.

If the US gave up its hostility, North Korea would “respond willingly at any time”, Kim told UN delegates in his speech.

“But it is our judgement that there is no prospect at the present stage for the US to really withdraw its hostile policy.”