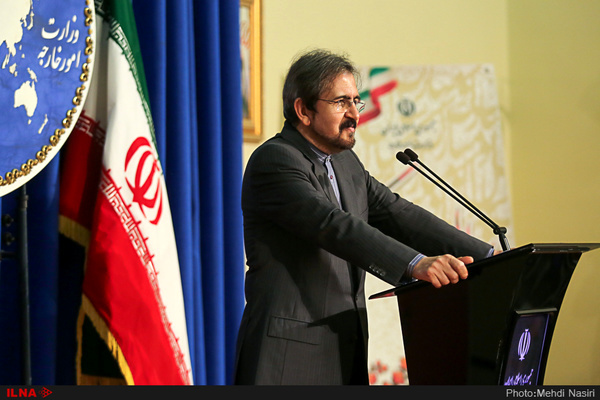 Iranian Foreign Ministry Spokesman Bahram Qassemi said that holding talks with the European Union (EU) over the Islamic Republic’s missile program is not something strange.

Speaking to reporters at his weekly press conference in Tehran on Monday, Qassemi pointed to recent talks between the representatives of Iran and the EU to save the 2015 nuclear deal known as the Joint Comprehensive Plan of Action (JCPOA) and said it is possible that the issue of the Iranian missiles has been raised in the talks.

“I have not heard what was exactly said (in the talks), but such a dialogue having taken place is not unnatural,” the spokesman said.

“In spite of the commonalities and relations that we have with European countries, there may be differences of opinion and disagreement over some issues,” he added.

The remarks came as Iran recently held talks with the European parties to the JCPOA to save the international accord following the US exit.

Last week, Iranian Deputy Foreign Minister for Political Affairs Seyed Abbas Araqchi said given the vague prospect of the JCPOA, there is a possibility that Tehran might leave the accord in coming weeks.

“I cannot say that the prospect of the continuation of negotiations with Europe is clear and can lead us to achieving a joint package for saving the JCPOA,” he said.

Iran’s patience has come to an end and it is probable that Iran will withdraw from the JCPOA in the coming weeks, Araqchi stated.

On May 8, the US president pulled his country out of the JCPOA, which was achieved in Vienna in 2015 after years of negotiations among Iran and the Group 5+1 (Russia, China, the US, Britain, France and Germany).

Meanwhile, Leader of the Islamic Revolution Ayatollah Seyed Ali Khamenei has underlined that any decision to keep the JCPOA running without the US should be conditional on “practical guarantees” from the Europeans.