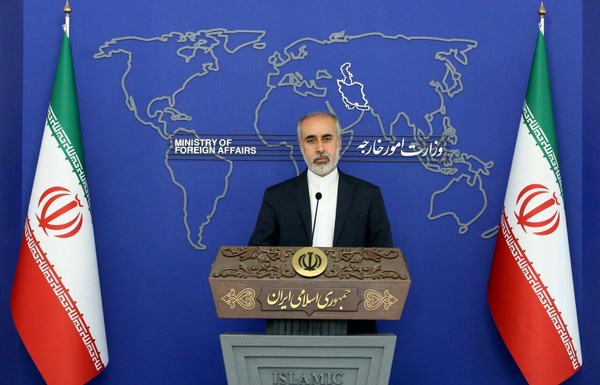 Iranian Foreign Ministry Spokesman Nasser Kanaani strongly condemned parts of the final statement of the G7 leaders against the Islamic Republic of Iran.

Kanaani made the remarks reacting to the final statement of the G7 summit in Germany.

We strongly condemn parts of the final statement of the G7 leaders against the Islamic Republic of Iran, he said.

This statement is unfounded, one-sided, and unfair, in accordance with the erroneous habits of the countries which have issued it, and indicates a futile insistence on failed policies that have played a major role in destabilizing the implementation of the nuclear deal, preparing for disputes in lifting sanctions, and have created insecurity and prevented establishing endogenous security arrangements in the Persian Gulf, he added.

The G7 statement deliberately ignores the gross violation of the Nuclear Non-Proliferation Treaty and UN Security Council Resolution 2231 by the United States and the imposition of maximum illegal sanctions against the honorable people of Iran, he noted.

The issuers of the statement, with the continuation of the policy of illegal cross-border sanctions against the Iranian people or the inaction in the face of it, have the greatest share in creating the current conflict and continue to insist on this wrong policy in various ways, he stated.

He described the statement as reflecting the wrong policies of its issuers in making baseless allegations against the Islamic Republic of Iran's safeguards cooperation with the International Atomic Energy Agency, which was evident in their recent intentions during a meeting of the IAEA Board of Governors, he noted.

Such irresponsible and provocative positions and behavior of the issuers of the statement posed the greatest threat to international security, the Iranian diplomat said.

Therefore, they are the ones who, in order to compensate for the wrong policies of the past, should use the significant opportunities provided by the Islamic Republic of Iran for negotiations, and bring about calmness to the result of negotiations by resorting to diplomacy, with complete lifting sanctions, he added.

We strongly condemn the destabilizing role of the parties issuing the statement in the Persian Gulf region he stated.

Instead of realizing the false accusations against Iran's legitimate missile defense program, which can never be negotiated, it is imperative that they be held accountable for the sale of billions of dollars in advanced weapons, one of the most important factors of instability in our region, he added.

Condemning the political, instrumental and selective use of human rights by the countries issuing the statement, Kanaani said: Those who claim for the human rights are the ones who turn a blind eye to the gross violation of the rights of more than 80 million Iranians by imposing maximum illegal sanctions and killing the defenseless people of Palestine and Yemen.

Were it not for the dual policies of these countries against terrorism and their support for the supporters of ISIL and other terrorist groups, our region would not face such a large amount of bloodshed and killing of innocent people in Iraq and Syria, he said.

The statement tries to hide this fact by playing the blame-game. By holding this group of countries responsible, the Islamic Republic of Iran reserves the right to pursue the rights of this group of compatriots and demand addressing damages against them, he noted.

The Islamic Republic of Iran, as it has shown, in line with its wise policy, emphasizes the continuation of diplomacy in the negotiations for the lifting sanctions and is after a good, strong agreement that is compatible with the legitimate interests of the Iranians, he said.

The Islamic Republic of Iran also emphasizes the neighborhood policy, which aims to create and promote endogenous stability, security and prosperity, collectively and without foreign intervention and presence, and does not need to persuade the issuers of the statement to pursue these policies, he stated.

We call on the issuing countries to refrain from their provocative actions, which are constantly narrowing the space for regional and international peace and security, he noted.