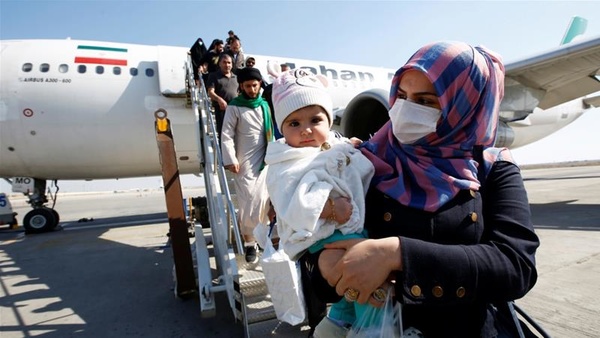 Authorities in Iraq have extended a ban on all arrivals from neighbouring Iran, except Iraqi citizens, as the country grapples with the possibility of an outbreak of the new coronavirus.

The extension was announced in a statement issued by caretaker Prime Minister Adel Abdul Mahdi's office on Saturday as Iran announced its sixth death from the disease that emerged in central China late last year.

The statement did not specify how long the ban, which was first announced on Thursday, would be in place.

Officially known as COVID-19, the virus has so far taken more than 2,300 lives, with the vast majority of those deaths happening in mainland China. It has spread to almost 30 countries including several in the Middle East: besides Iran, where there have been at least 28 confirmed cases, the United Arab Emirates, Egypt, Israel and Lebanon have all reported infections.

But to date, there have been no cases in Iraq.

On Saturday, Iraq's border crossings with Iran remained shut for the third day, with only Iraqi returnees allowed to enter and subjected to screening. Flights to and from Iranian cities had also been suspended, airport staff in the capital, Baghdad, said on Saturday.

Meanwhile, Iraq's top Shia leader Grand Ayatollah Ali al-Sistani on Friday also called on authorities to be "up to the level of responsibility" and step up preparations.

While officials have yet to announce when the Iran-Iraq border crossings will reopen, analysts say the financial implications will not allow for a prolonged closure.

Cross-border trade and travel are vital to both countries, Sajad Jiyad, of the Baghdad-based al-Bayan Centre, told Al Jazeera.

"There is a steady flow of pilgrims and religious tourists into Iraq that number tens of thousands per month," said Jiyad. "All businesses engaged in that sector … will suffer a large drop in revenues."

He added: "Iraq imports billions of dollars of goods from Iran per year and that trade will be disrupted leading to knock-on effect for Iraqi businesses and industry. Even basic foodstuffs will face a shortage leading to an increase in prices."

In Iran, officials have recommended that people limit their movement in and out of religious sites in Qom, where two elderly people became on Wednesday the outbreak's first fatalities in the Middle East.

Other measures taken in Iran include the closure of schools, universities and educational centers in 14 provinces across the country starting on Sunday.