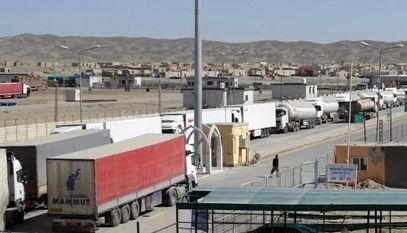 A United Arab Emirate (UAE)-Turkey transit corridor which passes through Iran was officially launched with the first shipment from the UAE port of Sharjah heading for the Turkish port of Mersin docking at the Iranian Shahid Rajaei port.

The shipment, then, was transported to Bazargan crossing at the border with Turkey in northwest Iran and arrived at its destination in eight days.

As reported, prior to the inauguration of the new transit route passing Iran, the exports of goods from Sharjah port to Mersin Port in Turkey took at least 20 days.

The previous route had to cross the Bab al-Mandeb strait, the Red Sea, and the Suez Canal, and all the way to Turkey which used to take over 20 days.

Iran is one of the countries that has a special status in trade and transit relations due to its strategic location and special geography, as the country is the passage of several important international corridors.

In the south of Iran is the Persian Gulf, which is home to the world’s major oil-producing countries. This region is considered as the energy bottleneck of the world.

In the north of Iran is the Caspian Sea, which is the best bridge between Iran, Russia, Kazakhstan, Turkmenistan and Azerbaijan and can play an important role in trade between these countries.

The country, on the other hand, borders Iraq, Turkey, Pakistan and Afghanistan to the west and east.

In other words, it can be said that Iran communicates with 15 countries through land and water borders, and at the same time it can act as a bridge between these countries (with each other and other parts of the world).

These countries have a large population and high income which can be effective as a factor in the development of transit and trade in the region.

The connection of Central Asian countries with the Persian Gulf, as well as the establishment of trade relations between East Asia and European countries through Iran, is very cost-effective, so that many of these countries seek to establish such relations through Iran.

This status has provided the country with many opportunities that making optimal use of them through the expansion of the transportation network and reliable and efficient communication, Iran can achieve foreign currency earnings and economic growth, and make transit revenue a suitable alternative to oil export, while improving its strategic position in the region.

Considering its geographical location, Iran can play a significant role in the transit of goods in the region and benefit a lot from its status in this due. To take full advantage of its location for transit, the country has many plans underway and, on the agenda, to boost its transit capacity.

Some of these plans include developing Shahid Rajaee Port, Iran’s largest and most-equipped container port in the south, and also Chabahar Port in the southeast of the country, connecting the ports to the railway network, development of transit via railway, and also some customs measures such as improving transit procedures in the customs offices