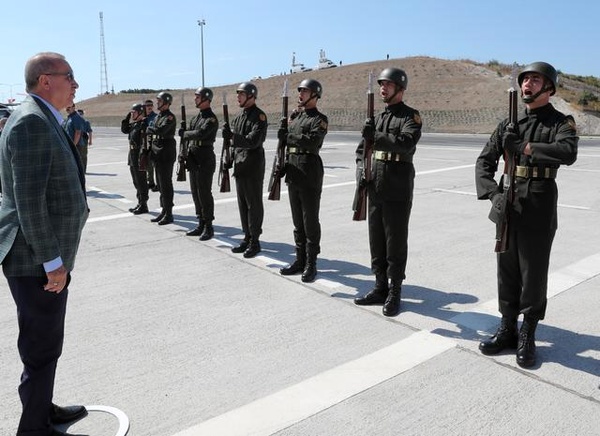 Turkey will carry out a military operation in a Kurdish-controlled area east of the Euphrates in northern Syria, Turkish President Tayyip Erdogan said on Sunday, its third offensive to dislodge Kurdish militia fighters close to its border.

Turkey had in the past warned of carrying out military operations east of the river, but put them on hold after agreeing with the United States to create a safe zone inside Syria’s northeastern border with Turkey that would be cleared of the Kurdish YPG militia.

But Ankara has accused Washington of stalling progress on setting up the safe zone and has demanded it sever its relations with the YPG. The group was Washington’s main ally on the ground in Syria during the battle against Islamic State, but Turkey sees it as a terrorist organization.

Erdogan said both Russia and the United States have been told of the planned operation, but did not say when it would begin. It would mark the third Turkish incursion into Syria in as many years.

“We entered Afrin, Jarablus, and Al-Bab. Now we will enter the east of the Euphrates,” Erdogan said on Sunday during a motorway-opening ceremony.

Asked about Erdogan’s comments, a U.S. official told Reuters: “Bilateral discussions with Turkey continue on the possibility of a safe zone with U.S. and Turkish forces that addresses Turkey’s legitimate security concerns in northern Syria.”

Overnight, three Turkish-backed Syrian rebel fighters were killed during clashes with the YPG, state-owned Anadolu Agency reported on Sunday. It said the YPG tried to infiltrate the front lines in Syria’s al-Bab area, where Turkey carved out a de facto buffer zone in its 2016 “Euphrates Shield” offensive.

Clashes such as these are frequent in the area, but casualties tend to be rare.

On Thursday, the Kurdish-led administration running north and east Syria issued a statement objecting to Turkish threats to attack the area.

“These threats pose a danger on the area and on a peaceful solution in Syria, and any Turkish aggression on the area will open the way for the return of Daesh (Islamic State), and that aggression will also contribute to the widening of the circle of Turkish occupation in Syria,” the statement said.

It called on the international community to take a stance that stops Turkey from carrying out its threats.