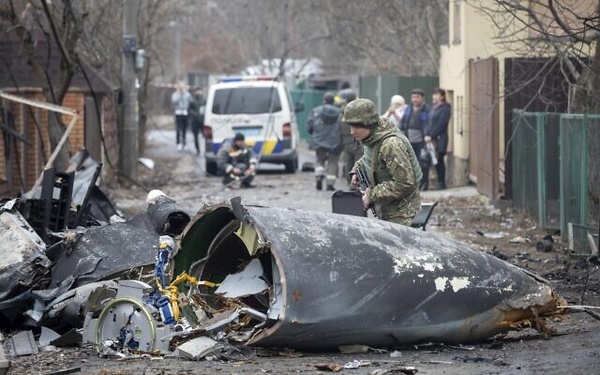 The war in Ukraine is likely to be over by early May when Russia runs out of resources to attack its neighbour, Oleksiy Arestovich, an adviser to the Ukrainian president's chief of staff, said late on Monday.

Russian forces are closing in on Ukraine's capital, Kyiv, with deadly attacks in several suburbs. This comes as a new round of talks between Russian and Ukrainian officials show little sign of progress.

Talks between Kyiv and Moscow – in which Arestovich is not personally involved – have so far produced very few results other than several humanitarian corridors out of besieged Ukrainian cities.

In a video published by several Ukrainian media, Arestovich said the exact timing would depend on how much resources the Kremlin was willing to commit to the campaign.

“I think that no later than in May, early May, we should have a peace agreement, maybe much earlier, we will see, I am talking about the latest possible dates,” Arestovich said.

“We are at a fork in the road now: there will either be a peace deal struck very quickly, within a week or two, with troop withdrawal and everything, or there will be an attempt to scrape together some, say, Syrians for a round two and, when we grind them too, an agreement by mid-April or late April.”

Drone footage shows widespread destruction in Mariupol as Russia's invasion of Ukraine continues. The war has forced nearly 2.7 million people to flee Ukraine. Thousands of civilians and soldiers have been killed.

A “completely crazy” scenario could also involve Russia sending fresh conscripts after a month of training, he said.

Still, even once peace is agreed, small tactical clashes could remain possible for a year, according to Arestovich, although Ukraine insists on the complete removal of Russian troops from its territory.

The war in Ukraine began on Feb. 24 when Russian President Vladimir Putin launched what he called a “special military operation,” the biggest attack on a European state since World War Two.