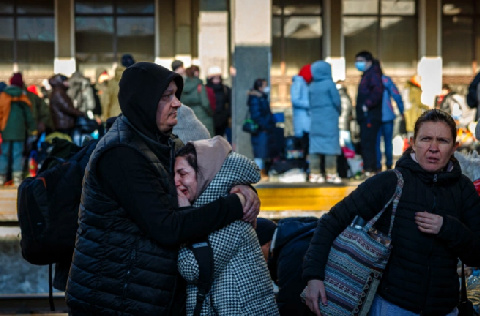 Addressing a joint session of Congress late on Tuesday, Biden said the US is imposing “powerful sanctions” on Russia that are cutting off its banks from the international financial system and “choking” its access to technological imports.

The US president also hit out repeatedly at Russia’s Vladimir Putin, saying that he alone is to blame for the war.

“Tonight, I’m announcing that we will join our allies in closing off American airspace to all Russian flights, further isolating Russia and adding an additional squeeze on their economy,” Biden said. “He has no idea what’s coming.”

“Tonight, I say to the Russian oligarchs and the corrupt leaders who built billions of dollars off this violent regime: No more,” the US president said.

“I mean it. The United States Department of Justice is assembling a dedicated task force to go after the crimes of the Russian oligarchs. We’re joining with European allies to find and seize their yachts, their luxury apartments, their private jets.”

Despite the deep partisan divisions in Congress, legislators – many of whom sported blue and yellow outfits, the colours of Ukraine’s flag, in support of the country – applauded and cheered for Biden as he spoke of confronting Russia.

“While he [Putin] may make gains on the battlefield, he will pay a continuing high price over the long run,” Biden said.

The US president also expressed support for the Ukrainian people and paid a nod to Kyiv’s ambassador to Washington, Oksana Markarova, who was in attendance at the invitation of First Lady Jill Biden.

Russia launched an all-out attack on Ukraine last week, drawing condemnation and sanctions from major world powers. The invasion came after a months-long standoff that saw Moscow amass as many as 200,000 troops near the Ukrainian border.

In less than a week, the violence has prompted 660,000 Ukrainians to flee neighbouring countries as Russia continues to bombard cities across Ukraine.

US defence officials have said they believe the Russian offensive has slowed down because of fierce Ukrainian resistance.

Earlier this year, Russia repeatedly denied US and European allegations that it was planning to invade Ukraine, insisting that it had legitimate security concerns about Kyiv’s deepening alliance with the West – and demanding guarantees that Ukraine would not be allowed to join NATO.

On Tuesday, Biden said while the US will not send troops to fight Russia in Ukraine, it is prepared to defend its NATO allies.

“Let me be clear, our forces are not engaged and will not engage in conflict with Russian forces in Ukraine,” Biden said.

“Our forces are not going to Europe to fight in Ukraine, but to defend our NATO Allies – in the event that Putin decides to keep moving west. Every single inch.”

Biden tried to allay fears about rising fuel prices amid the Ukraine crisis, saying that the US is set to release 30 million barrels of oil from its strategic reserve to stabilise the energy market. Russia is one of the world’s top oil and gas producers.

“These steps will help blunt gas prices here at home. But I know news about what’s happening can seem alarming to all Americans,” the US president said.