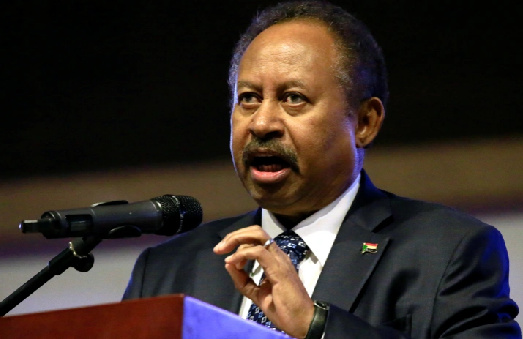 Hamdok’s decision, announced in a televised address late on Sunday, came six weeks after he returned to his post in a deal with the coup leaders he argued could save Sudan’s political transition. But the pro-democracy movement rejected that agreement, and Hamdok failed to name a new government as thousands of people continued to protest against the military’s power grab.

In his resignation speech, Hamdok said a roundtable discussion is needed to agree on a new “national charter” and to “draw a road map” to complete Sudan’s transition to democracy.

“I decided to give back the responsibility and announce my resignation as prime minister, and give a chance to another man or woman of this noble country to … help it pass through what’s left of the transitional period to a civilian democratic country,” Hamdok said.

The announcement throws Sudan’s future deeper into uncertainty, three years after an uprising that led to the overthrow of longtime leader Omar al-Bashir.

An economist and former United Nations official widely respected by the international community, Hamdok became prime minister in 2019 under a power-sharing agreement that promised multiparty elections in 2023.

But military-civilian ties became frayed as the army refused to cede power, and on October 25, Hamdok was removed and placed under house arrest. He was reinstated on November 21 in a deal that called for an independent technocratic cabinet under military oversight.

Sudan’s pro-democracy movement denounced that agreement, however, insisting that power be handed over to a fully civilian government.

Hamdok said on Sunday that his efforts to bridge the widening gap and settle disputes among the political forces have failed.

“Despite all that was done to bring about the desired and necessary agreement to fulfil our promise to the citizen of security, peace, justice and an end to bloodshed, this did not happen,” he said.

The prime minister also warned that the ongoing political deadlock could become a full-blown crisis and damage the country’s already battered economy.

“I tried as much as I possibly could to prevent our country from sliding into a disaster. Now, our nation is going through a dangerous turning point that could threaten its survival unless it is urgently rectified,” he said.

The medical group, which is part of the pro-democracy movement, said one of those who dead was hit “violently” in his head while taking part in a protest march in the Sudanese capital, Khartoum. A second person was shot in the chest in Khartoum’s twin city of Omdurman, the CCSD said, adding that dozens of protesters were also wounded.

The protests came despite tightened security and blocked bridges and roads in Khartoum and Omdurman. Internet connections were also disrupted before the protests, according to advocacy group NetBlocs. Authorities have used such tactics repeatedly since the October coup.

Sunday’s deaths have brought the death toll among protesters since the military takeover to at least 57, according to CCSD. Hundreds have also been wounded.

In a statement on Twitter, the US Department of State also called for the appointment of the next prime minister and cabinet “in line with the [2019] constitutional declaration to meet the people’s goals of freedom, peace, and justice”.