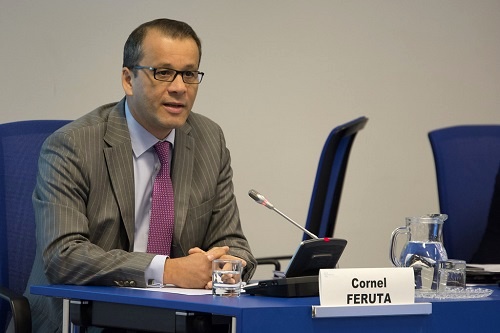 "The visit is part of ongoing interactions between the IAEA and Iran," the agency's spokesman said on Friday.

Feruta's visit to Tehran comes before a quarterly meeting of the IAEA's 35-country Board of Governors next week and after the Islamic Republic's announcement of further reduction in its commitments under the 2015 nuclear accord, officially known as the Joint Comprehensive Plan of Action (JCPOA), it signed with major world powers.

In a letter to the EU foreign policy chief Federica Mogherini on Thursday, Iranian Foreign Minister Mohammad Javad Zarif said Iran will begin unlimited nuclear research and development work from Friday, officially unleashing the third stage of its measured responses to Europe's lack of action in the face of Washington's violation of the nuclear deal.

President Rouhani says the country will begin the third phase of reducing its commitments under the 2015 nuclear deal on Friday.

"We took the first step in reducing our commitments, and gave the P4+1 a two-month deadline. Then we went ahead with the second phase, giving them another two-month deadline. In the four-month period, we held negotiations with the P4+1, including the European Union and the three European countries in particular," Rouhani said.

Iran has rowed back on its nuclear commitments twice in compliance with articles 26 and 36 of the JCPOA.

Tehran says its reciprocal measures will be reversible as soon as Europe finds practical ways to shield the Iranian economy from unilateral US sanctions which were imposed last year when President Donald Trump withdrew from the nuclear deal.

European signatories to the JCPOA have so far failed to uphold their commitments. They have expressed vocal support for the deal, but failed to provide meaningful economic incentives as required under the nuclear agreement.

The spokeswoman for the EU foreign policy chief, Maja Kocijancic, told reporters in Brussels on Friday that the United Nations nuclear agency has a "key role... in monitoring and verifying the implementation by Iran of the nuclear commitments" under the JCPOA.

The European Union says there has been advancement in its long-anticipated trade mechanism with Iran.

"Our commitment to the nuclear deal depends on full compliance by Iran," she said, noting that the EU based its assessment of that "on the reports done by the International Atomic Energy Agency."

During a meeting of EU foreign ministers in the Finnish capital of Helsinki late last month, Mogherini said the European Union will continue working to preserve the multilateral nuclear deal but will welcome any progress beyond it.

The EU foreign policy chief says the bloc will welcome any progress beyond preserving the JCPOA.

"Again if something else can be built on it [JCPOA], this would be welcomed and accompanied by the European Union," the EU foreign policy chief said.