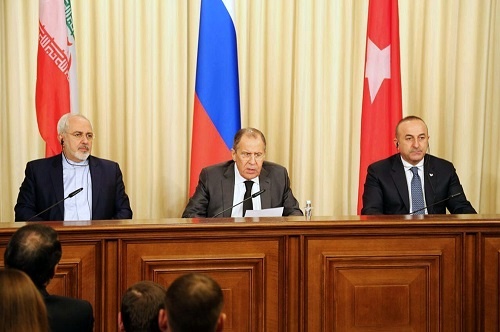 Foreign Ministers of Iran, Turkey, and Russia will discuss developments in Syria and the northwestern city of Idlib in the country in a meeting in New York.

Turkish Foreign Minister Mevlüt Çavuşoğlu told reporters on Friday that a trilateral meeting between him and his Iranian counterpart Mohammad Javad Zarif and Russian Foreign Minister Sergey Lavrov is expected to take place in the margin of the General Assembly of the United Nations.

“The aim of this meeting is to negotiate on the implementation of Sochi agreement which should be guided toward ceasefire and political solution,” Çavuşoğlu said.

He referred to the de-escalation zone established in Syria, saying that its borders is defined in Sochi agreement and now is the time to take further actions in the framework of this agreement.

The Turkish foreign minister stressed that in addition to Iran, Russia and Turkey, all the parties and countries should cooperate in establishing the Constitution and finding a political solution in Syria.

Turkish President Recep Tayyip Erdogan and Russian President Vladimir Putin in a recent press conference announced that a 15-to-20-kilometers-deep buffer zone would be established between the Syrian army and the oppositions in Idlib by October 15, which will be controlled by Turkish and Russian forces.