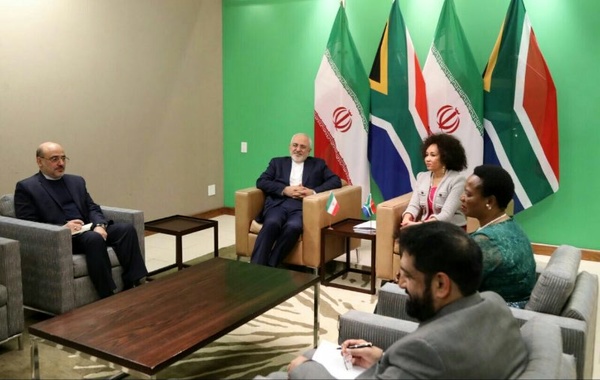 The two foreign ministers are to hold their second round of talks Wednesday. Zarif was also scheduled to take part in a banquet given in his honor by Ms Sisulu. He will also meet with the South African president Wednesday.

Upon arrival in Pretoria, Zarif referred to ties between Iran and South Africa , saying Iran has always stood by the South African people.

Following the victory of the Islamic Revolution, Iran severed its diplomatic ties with the Apartheid regime but since the victory of the South African people, Tehran has established the best relationship with Pretoria, the Iranian foreign minister said.

The aim of the visit by Zarif and his accompanying delegation to Pretoria is to hold talks on bilateral relations and the 2015 Iran nuclear deal with the five permanent members of the UN Security Council - the US, The UK, France, Russia and China plus Germany.

South Africa is the second big economy of the African continent which has taken positive steps towards promoting relations with Iran following the conclusion of Iran's nuclear deal with G5+1.