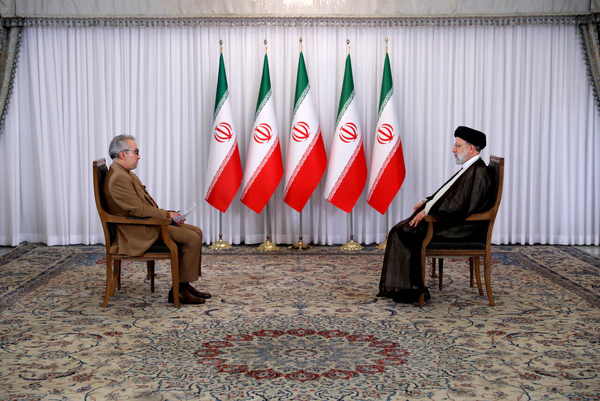 In his 7th live televised interview, President Raisi said the enemies have targeted Iran's territorial integrity and national sovereignty by creating differences among the Iranians.

The Iranian president, meantime, described the results and achievements of his latest two trips to Samarkand and New York.

He referred to his trip to Samarkand to attend the Summit of Shanghai Cooperation Organization and discussed meeting with heads of 10 regional countries as successful and in line with the development of neighborhood policy.

President Raisi also referred to his visit to the New York to attend the United Nations General Assembly and said, "This was the first visit of the President of the Islamic Republic of Iran to American after the assassination of Haj Qasem Soleimani, and it was necessary to broadcast the voice of the authority and innocence of the Iranian nation to the world."

He went on to discuss the achievements of the two recent trips to Samarkand to participate in the Shanghai Summit and the trip to New York to attend the United Nations General Assembly and stated, "Iran's membership in the Shanghai Organization is an important issue."

Recalling that the members of the Eurasian Union and Shanghai are significant countries, the President said, "Naturally, Iran's economic and commercial relations with these countries and with these infrastructures can definitely contribute greatly to the development of trade and economic development of our country."

The Iranian president continued, "In addition to participating in the general debate of the Shanghai Organization, where the heads of the countries were present, and Iran's official membership was officially announced, I also met with the President of China, and in this meeting, the decision and will of the two countries to implement the 25-year plan between the two countries were emphasized."

President Raisi pointed out, "In this meeting, the development of cooperation between the two countries in the field of energy, which has always existed between Iran and China, as well as monetary and financial issues to make bilateral trade more active, were emphasized by the presidents."

He stated that the participation of Chinese companies in important and fundamental projects such as railway projects in Iran, and added, "In the meeting of the President of China, it was decided that these matters should be followed seriously and we can pursue the cooperation between the two countries in railway projects."

President Raisi further said, "What is certain is that we will continue our cooperation in a serious and extensive manner between the two countries."

The Iranian president further referred to the development of mutual cooperation with Russia, and added, "Since my trip to Moscow until the recent Shanghai summit, our business relations with Russia have increased by 80 percent."

He stated that "we have cooperation with Russia in various fields such as space, oil and energy as well as commercial and economic fields, and stated that cooperation such as the North-South Corridor, which is the rail route between Sarakhes and Chabahar, were also discussed at the Shanghai Summit".

The Iranian president referred to Iran's cooperation with India in Chabahar Port, and said, "In the meeting I had with the Prime Minister of India on the sidelines of the Shanghai Summit, the will of the two countries to continue this cooperation seriously and increase its speed was emphasized so that we can take full advantage of this capacity."

President Raisi further referred to his first foreign trip as president to the Shanghai Summit hosted by Tajikistan and said, "Since then, Iran's economic and commercial relations with Tajikistan have increased 5 to 6 times in various fields and we have various cooperation with other countries of the Central Asia, which are in line with the continuation of the neighborhood policy."

The Iranian president also said that the policy pursued by Iran with neighboring countries has led to mutual trust between our country and the Shanghai member countries, and now "we must seek to improve this trust". "In general, the neighborhood policy has worked in the continuation of objective and practical cooperation between us and the neighboring countries".

He referred to the bilateral meetings on the sidelines of the Shanghai Summit with the heads of 10 countries, and emphasized that the main issues raised in these meetings were the development of economic and commercial activities between Iran and the countries of the region.

Referring to his bilateral meetings with the heads of some countries and his participation in scientific and specialized meetings with senior media managers and religious leaders in the United States on the sidelines of the United Nations General Assembly, the President said, "In all these meetings, issues related to the positions of the Islamic Republic of Iran were raised."

He stated, "In the meeting we had with President Emmanuel Macron, we discussed nuclear and bilateral issues and the position of the Islamic Republic and what was announced earlier. We announced that a fair and good agreement is completely achievable and we are ready for a good agreement, but the agreement must be fair."

Regarding the details of his meeting with the French President in New York, the President added, "The main point we emphasized was that the Americans withdrew from this agreement and the Europeans did not fulfil their obligations. President Macron agreed that the Europeans did not fulfil their commitments. I said that this time we should focus on adherence to commitments. Our positions were such that he said that he would go and talk to Americans and Europeans and express our positions to them and inform us about it."

He insisted on the guarantee of the Western parties to the Islamic Republic to reach a good agreement, and stated, "We once witnessed that they withdrew from the JCPOA and did not fulfil their commitments, so we should be careful."

Explaining the other details of his meeting with President Macron, President Raisi said, "I told him that you are negotiating on the one hand and proposing a resolution to the Board of Governors on the other hand, these issues do not go together, and the point I emphasized to the French president was that, as Europe, how much do you follow the Americans? I gave him an example and said that during my trip to France to participate in a conference, a Frenchman said that the life of the building where I sat was longer than the entire life of America, so now why are you following America with this long history? Of course, he said that their position was independent."