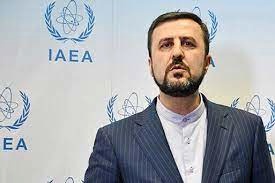 Gharibabadi made the remarks during separate meetings in Tehran with Belgian and German ambassadors to Tehran.

Referring to the recent death of a 22-year-old woman in a police custody in Tehran, the official said that Iran is fully resolved to pursue the rights of its citizens, including Ms. Mahsa Amini.

He said that the Iranian Judiciary and Parliament formed special teams in the very first hours of the incident to probe into the case.

The official regretted that certain European countries and some international human rights bodies, in a hasty and politically-motivated move, raised some claims that Ms. Amini had been beaten, while such claims were rejected by the initial studies and a report by Kasra Hospital of Tehran.

Gharibabadi, however, noted that the cause of the death is still under investigation and the results will be announced soon.

He criticized the support of the United States and certain European countries for unrests across Iran that were held under the name of peaceful gatherings.

Gatherings that are coupled with violence and carrying cold weapon and firearms and destruction of public and private property are nowhere called peaceful gatherings, the official said.

Iran believes that the countries that encouraged non-peaceful rallies and acts of violence across Iran have had a hand in shedding the blood of innocent people and in the damages to the property, he added.